“Our people have fought against the United States for 30 years and have humiliated it. You are nothing compare to that, your masters have been humiliated like that,” he said at Friday prayers.

“There is no crisis in the country and you are creating a crisis. Stop it!” Ahmad Khatami was quoted by the Isna news agency.

Mousavi, in his statement, accused the government of making more mistakes by resorting to “violence and killings” to quell the protests over the poll outcome, that saw Mahmoud Ahmadinejad, the incumbent president, re-elected for another term.

“Arresting or killing Mousavi, [another opposition leader Mehdi] Karroubi … will not calm the situation,” Mousavi, who lost the election, said in the statement.

Mousavi also demanded that the government “take responsibility for the problems it has created in the country … and recognise people’s right to lawful assembly”.

“I say openly that until there is an acknowledgement of the existence of a serious crisis in the country, there will be no possibility of resolving the problems and issues.”

Baqer Moin, a specialist on Iran based in London, told Al Jazeera that Mousavi was being both defiant and conciliatory in his statement.

“Having said that he comes with five suggestions saying that if you really want peace in the country you can’t go overnight towards the maximum demand of everybody – we have to move gradually towards a destination.”

“So in a sense he is coming with some realistic proposals within the constitution to deal with the current crisis,” he said.

Iran has been in political turmoil since the June poll, with Mousavi and the rest of the opposition alleging election fraud.

Despite government measures to curb protests, opposition workers have intermittently taken to the streets of the capital Tehran and elsewhere to vent their anger at Ahmadinejad’s re-election, often triggering violent clashes between protesters and security forces.

In the latest round of violence during Ashoura commemorations, eight Iranians – including a nephew of Mousavi – were killed. The opposition said they died in police shooting, a charge denied by the authorities. 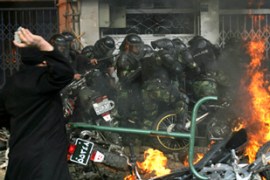 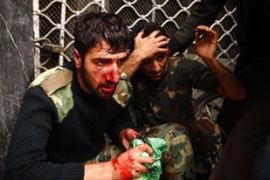 Up to eight people reported dead following clashes around Shia fesitval of Ashoura. 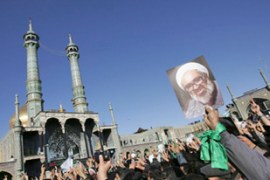