The North African wing of al-Qaeda on Thursday released photographs of seven hostages held in Niger, the first since the group was kidnapped earlier this month. 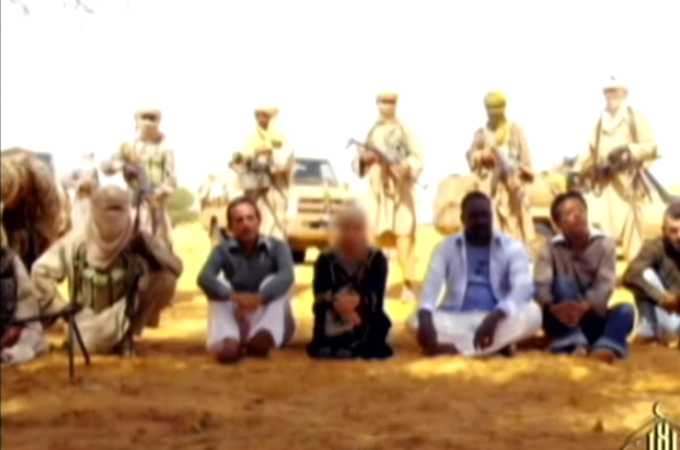 The photo shows seven hostages, with a group of heavily armed men behind them

The photos released to Al Jazeera show the group, which includes five French nationals and one each from Madagascar and Togo, sitting on the sand as several gun-toting men in Bedouin clothing stand behind them. It is impossible to identify where the photos were taken.

A spokesman for the French foreign ministry declined to comment on the photographs.

The group was abducted earlier this month, and are reportedly being held in a mountainous region in northwestern Mali. French officials say they have not received any demands from al-Qaeda in the Islamic Maghreb (AQIM), the group that carried out the kidnapping.

The hostages are employees of two French firms, Areva and Vinci, which do business in the mining town of Arlit in Niger.

Anne Lauvergeon, the head of Areva, arrived in Niger on Thursday evening to meet with president Saloui Djibo about the hostages.

Kidnappings have netted more than $65 million for the group over the last five years, according to analysts.

He said the money helped strengthen the group, which is a growing concern for countries in the arid Sahel region. Intelligence chiefs from Mali, Niger, Mauritania and Algeria met in Algiers earlier this week and agreed to set up an intelligence-gathering centre focused on AQIM. The centre will reportedly be based in Algiers.

A US citizen, Mohamed Omar Debhi, was arrested in Spain earlier this week for reportedly sending more than $80,000 to AQIM.