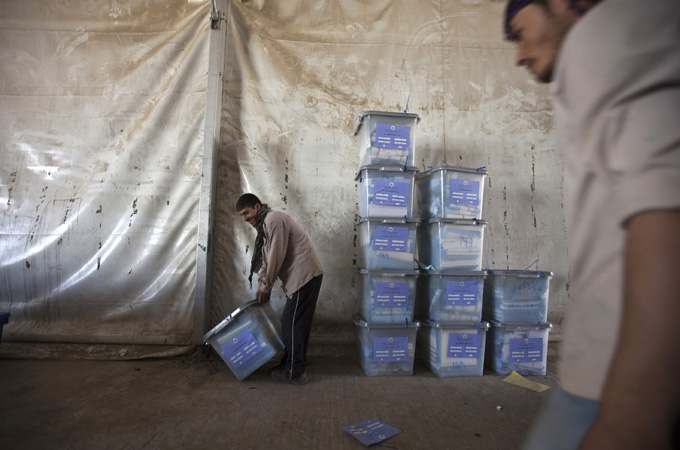 Many of the serious complaints deal with voter intimidation, ballot-stuffing and improper vote counting [Reuters]

Candidates and poll workers have filed more than 1,000 “potentially significant” claims of fraud regarding last week’s parliamentary elections in Afghanistan.

The Electoral Complaints Commission (ECC), the joint Afghan-international body that reviews allegations of fraud, has received more than 3,000 complaints since the election on September 18. More than 1,000 have been classified as “potentially significant”, meaning they could affect the outcome of the vote in a particular province.

Another 700 complaints have been labelled insignificant, while more than 1,300 have yet to be evaluated.

Data is not yet available for four provinces – Paktika, Kandahar, Zabul and Nuristan – all of them areas where insecurity made voting particularly difficult.

Fraud appears to have been widespread across the country, according to the ECC’s figures. In Wardak province near the capital, Kabul, 31 of 40 complaints have been labelled potentially significant; in Badghis province in the west, 61 of 85 received that designation.

The New York Times reported on Friday that Ahmed Wali Karzai, the brother of Afghan president Hamid Karzai, would be one beneficiary of the alleged fraud: Candidates have accused him of “drawing up a list of winners” before the election was even held.

But the geographical distribution of the fraud complaints suggests that a number of local powerbrokers will benefit, not just Karzai.

In at least 11 of Afghanistan’s 34 provinces, more than 50 per cent of the complaints are potentially significant, according to the ECC.

Many of the complaints in those provinces, listed below, deal principally with three types of fraud. There are polling irregularities, including ballot stuffing or the use of fake voter cards; counting irregularities, in which election officials report incorrect results; and allegations of “undue influence”, when campaign or poll workers harass or intimidate voters.

Many of the complaints seem to be corroborated by reports from domestic and international observers. The Free and Fair Election Foundation of Afghanistan (FEFA), for example – the country’s largest domestic monitoring group – documented more than 300 cases of voter intimidation on election day.

And the Afghanistan Analysts Network, an independent research organisation based in Kabul, published a long list of anecdotal accounts of fraud from Afghan voters and officials.

A female candidate in Kandahar, for example, accused a rival of “buying 5,000 votes”; and a campaign worker in Nangarhar province said people were openly “buying voter cards in the polling centre”.

The vote was the second parliamentary election to be held in Afghanistan since the Taliban was toppled by the US-led invasion in 2001. Final results are not due until the end of October.