Binyamin Netanyahu, Israel’s prime minister, has fended off intense pressure from the United States and the international community, refusing to extend the 10-month partial moratorium on settlement construction.

The freeze expired at midnight on Sunday, sparking fears for the future of Middle East peace talks.

While he backed a resumption of construction, Netanyahu called on Mahmoud Abbas, Palestinian president, not to abandon peace talks in protest.

“I call on president Abbas to continue with the good and honest  talks we have just embarked upon, in an attempt to reach a historic  peace agreement between our two peoples,” Netanyahu said in a  statement early on Monday, minutes after allowing the partial  moratorium on settlement construction to lapse.

Abbas, for his part, urged Netanyahu to re-impose the building  ban.

Abbas “wants to continue the negotiations but Netanyahu must take a decision to freeze the settlements in order to create an appropriate atmosphere to proceed with the peace talks,”  Abbas’ spokesman Nabil Abu Rudeina told AFP news agency in Paris.

The Palestinian leader has repeatedly warned he would walk out  of peace talks that were relaunched at the beginning of the month if  Israel resumes building in the occupied West Bank.

But he appeared to step back from the brink on Sunday, saying he would meet top Arab diplomats on October 4 before deciding his next move.

The premier’s office declined to comment on his activities as the deadline approached.

Israeli and Palestinian negotiators were believed to be still meeting in Washington.

The United States on Sunday renewed its call that Israel keep a freeze on the construction of new settlements, saying that its position on the issue remains the same.

“We remain in close touch with both parties and will be meeting with them again in the coming days,” the spokesman said.

“We remain focused on the goal of advancing negotiations toward a two-state solution and encourage the parties to take constructive actions toward that goal,” said Crowley.

The top policy adviser to Barack Obama, the US president, said Washington was still hopeful of brokering a compromise over the end of the ban on new building in the occupied West Bank.

“We are going to urge and urge, and push throughout this day to get some kind of resolution,” David Axelrod told ABC News.

‘The freeze is over’

Around 2,000 people, including hundreds from Netanyahu’s own right wing Likud party and a large contingent of flag-waving evangelical Christians, flooded into Revava settlement in the northern West Bank for a rally marking the end of the freeze.

Standing in front of a stage draped with a huge banner emblazoned with the slogan “We salute the pioneers of Judaea and Samaria,” the crowds counted down from 10 to zero as the sun set over the rugged hills.

“The freeze is over,” shouted Likud hardliner Danny Danon to roars of approval.

Earlier, settlers laid the cornerstone for a new nursery school in the nearby settlement of Kiryat Netafim in an event organised by Danon, a political hardliner but not a settler himself.

But settlers conceded there despite the symbolic displays, there was unlikely to be a flood of construction.

“We are getting back to business as usual and building but we will respect the prime minister’s request,” said David Ha’ivri, head of the Samaria regional council.

Jewish settlement on occupied Palestinian land is one of the bitterest aspects of the conflict. Currently, around 500,000 Israelis live in more than 120 settlements across the West Bank and east Jerusalem, territories the Palestinians want for their promised state.

A previous round of direct talks collapsed in December 2008 when Israel launched a war on the Gaza Strip. 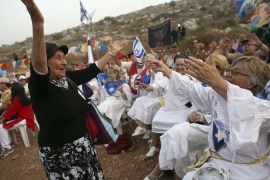 President Abbas seems to be non-committal to continuation of talks if Israel fails to extend settlement moratorium. 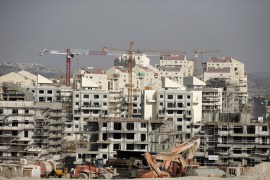 Abbas vows to continue with talks

Palestinian president signals that an end on the settlement freeze won’t mean the end of the peace talks. 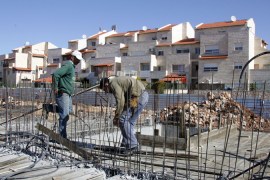