France could seek negotiations with a branch of al-Qaeda that seized five French nationals and two other foreigners in Mali earlier this month, a presidential aide has said.

“We are ready to talk to the kidnappers,” a spokesman from the office of Nicolas Sarkozy said on Sunday, referring to Al-Qaeda in the Islamic Maghreb (Aqim).

The source, who was quoted by the AFP news agency, added that “we have every reason to think that the hostages are alive” and had been taken to Timetrine, a desert area near the Algerian border.

Members of Aqim seized the French nationals, along with a Togolese and a Madagascan, in a raid on September 16 on a uranium mining town in the deserts of northern  Niger.

Earlier, a Malian source told AFP that he had seen the hostages and they were all alive.

“They are even all able to stand up,” he said.

“Maximum discretion is needed. We are giving this information to reassure the families, but don’t ask us any more.”

Most of the hostages work for France’s state-owned nuclear giant  Areva or its engineering sub-contractor Satom, and the firms have now withdrawn foreign workers from their Niger uranium-mining  operations.

France also warned its citizens to avoid travelling to the countries of west and north Africa that lie in the Sahel, a vast desert region where in recent years Aqim has become increasingly active.

On Sunday, army chiefs and counterterrorism experts from the Sahel region met in southern Algeria in a bid to come to grips with the growing threat of Aqim.

“I cannot stress enough the stakes in this meeting,” General Ahmed Gaid Sakah, the Algerian army chief of staff, said at talks that brought together officials from Algeria, Mali, Mauritania and Niger.

He called on the countries to “respect their commitments and move into action” against terrorism in their region.

After the meeting, a Malian officer said the army chiefs had agreed to joint military operations.

“We chose places where our troops will come together to combat terrorism. I think things will move,” he said.

France has deployed an 80-strong military intelligence unit and spotter aircraft to the Sahara to try to track down Aqim, but officials have so far played down.

Aqim – which formed when Algerian anti-government fighters pledged allegiance to al-Qaeda – posted an internet statement claiming the hostage-taking was revenge for a French raid.

That raid took place on July 22, when French and Mauritanian  troops stormed an al-Qaeda base in northern Mali and killed seven fighters, but failed to find a previous French hostage – aid worker Michel Germaneau.

Abu Musab Abdul Wadud, the Aqim leader, has said that Germaneau was subsequently executed in retaliation for the raid, although French officials suspect the elderly aid worker may have died beforehand.

Despite repeated denials, France has earned a reputation over the years for paying off kidnappers – with cash and by prisoner exchanges – said to be aimed at protecting its economic interests and the lives of its citizens. 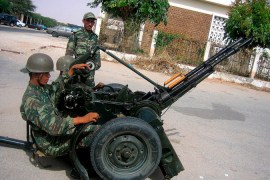 North African army chiefs convene in Algeria in a bid to counter the threat of al Qaeda linked fighters in the region.