A female Pakistani scientist has been sentenced to 86 years in prison for trying to kill US officers in Afghanistan.

Aafia Siddiqui’s sentence was handed down by a federal New York court on Thursday.

“It is my judgement that Dr Siddiqui is sentenced to a period of incarceration of 86 years,” Judge Richard Berman said.

Siddiqui denounced the trial and said an appeal would be “a waste of time. I appeal to God”.

The neuroscientist was convicted by a US jury in February on charges she grabbed a US warrant officer’s rifle while she was detained for questioning in Afghanistan’s Ghazni province and fired at FBI agents and military personnel as she was wrestled to the ground.

Siddiqui, branded “Lady al-Qaeda” by some in the US press, was wounded by return fire but recovered and was brought to the US to face trial.

Afghan police said she was carrying containers of chemicals and notes referring to mass-casualty attacks on New York landmarks when they arrested her in 2008.

Her conviction has been widely criticised in Pakistan, where Siddiqui is believed to have been innocent and mistreated in US detention.

“When that news broke it was carried widely by the private networks … everyone condemned the sentence,” Al Jazeera’s Kamal Hyder, reporting from Islamabad, said.

“As far as the government is concerned, hours before the verdict the interior minister came on television saying no stone would be left unturned, that they would do their best to get her released.”

Rallies were staged in several Pakistani cities on Thursday. In Karachi, about 400 members of the Jamaat-e-Islami group gathered, carrying pictures of Siddiqui and chanting slogans against the US and its justice system.

The group tried to march towards the US consulate, but the police stopped them before they got too close.

Al Jazeera’s Kristen Saloomey, reporting from the courthouse where Siddiqui was sentenced, said she had been talking for 30 minutes in court on a variety of topics.

“Siddiqui’s main point was that it didn’t matter to her if she spends the rest of life in prison. She said that what she cared about is that no violence be committed in her name, referring to the tension and outrage in her native Pakistan over her case.

“She disputed her lawyer’s claim that she is mentally unfit to stay on trial, then went on to talk about her dreams and the symbolism of her dreams, genetic testing, her belief that Israel is behind the attacks of September 11, 2001, and that Israel was plotting with her prison warden to attack the United States.”

Although Siddiqui was not convicted of terrorism, the government has argued that she is a cold-blooded radical who deserves a “terrorism enhancement” under federal sentencing guidelines that would guarantee a life term.

“She made it explicit, through her own words and her conduct, her intention to kill Americans, to cause ‘death to Americans,”‘ prosecutors wrote in court papers.

Prosecutors said notes she carried at the time of her detention referenced “a ‘mass casualty attack’ … NY CITY monuments: Empire State Building, Statue of Liberty, Brooklyn Bridge,” and another musing how a dirty bomb would spread more fear than death.

They claimed the notes, along with the fact that she was carrying sodium cyanide, showed she was not an accidental menace.

“Mentally ill and caught in the crossfire of a war that is no longer fought on conventional battlegrounds, Dr Siddiqui’s self-destructive behaviour got her shot once in the abdomen, charged with attempted murder and … convicted of the same,” the defence wrote.

Authorities claim she returned to her native Pakistan in 2003 after marrying an al-Qaeda operative related to Khalid Sheikh Mohammed, the admitted mastermind of the September 11, 2001, attacks.

Stories differ on her whereabouts between 2003 and her arrest in 2008. Her family says she was held at the US military’s Bagram airbase in Afghanistan. But her first husband says she spent five years on the run with her children, before being arrested in 2008 with her adopted son in Afghanistan.

Testifying in her own defence at her trial, Siddiqui claimed she was tortured at a “secret prison” before her detention. Charges that she purposely shot at soldiers were “crazy”, she said. “It’s just ridiculous.” 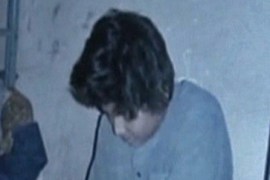 Stories differ over the whereabouts of Pakistani scientist between 2003-2008. 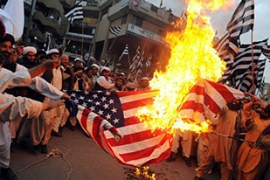