“We have already evacuated around 1,000 families” from areas vulnerable to flooding and storm surges, Jose Gajon, director of civil defence for Baja California Sur state, said.

Across the country to the east, the toll from the powerful hurricane which struck last Friday, mainly in Veracruz state along the Gulf of Mexico coast, rose to 22 dead as emergency crews searched many of the hundreds of towns and villages inundated by heavy rains and flooding and struggled to reach more remote communities.

Among the fatalities were seven passengers on a bus that was buried when a hillside bloated by heavy rains gave way early on Tuesday, near the central town of Villa Guerrero some 60km from Mexico City, according to Tito Maya de la Cruz, the town’s mayor.

Another 20 people were missing, he added, amid fears the death toll would rise as rescue teams had spent hours digging through thick mud and debris in an effort to find missing people.

At least 12 people died from Karl-related flooding or landslides in Veracruz, where authorities said half a million people have been affected, including 40,000 who remained in emergency shelters.

“Nearly half the state is under water,” Veracruz governor Fidel Herrera told reporters a day after president Felipe Calderon toured hard-hit regions of the state.

Authorities described this year’s wet season as the worst on record. 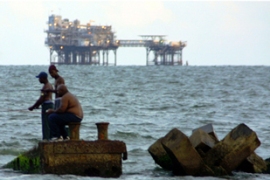