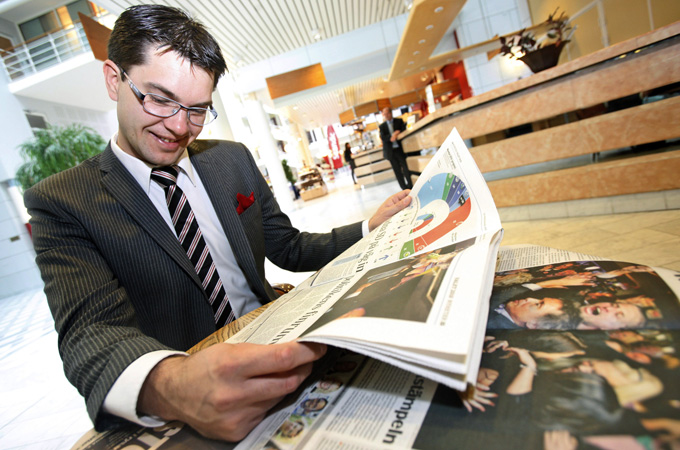 The Sweden Democrats won seats in parliament, reflecting a European trend of success for far-right parties in national elections [EPA]

As Sweden adjusts to the idea of a far-right party sitting in the country’s famously liberal parliament for the first time, several postal workers in the town of Sodertalje have found themselves in trouble.

During the campaign, they refused to distribute election material from the anti-immigration Sweden Democrats (SD) to minority residential areas, arguing that the pamphlets constituted hate speech.

Their employers, Posten, have taken a dim view of their employees’ political stance. “We cannot, as the dominant mail service, act as a censor,” Posten told its rebellious workers.

The row over the delivery of campaign material may seem parochial, but it goes to the heart of a debate being played out across Europe; how best to respond to the recent resurgence of the far-right in national elections across the continent.

Anti-immigration parties have notched up impressive gains in Europe in recent months, often doing well in countries with a reputation for liberal politics and tolerant electorates.

In the Netherlands, the far-right Freedom Party came third in June elections, denying its rivals a governing majority and ensuring it a seat at the negotiating table in coalition talks. Meanwhile, in Hungary, the Jobbick Party, which advocates incarcerating the country’s Roma population in internment camps, also did well in this year’s parliamentary election.

Far-right parties form part of Italy’s coalition government, and have seats in the parliaments of Austria, Bulgaria, Denmark, Latvia and Slovakia. In Britain, the British National Party (BNP) has won European and local elections and appeared on a mainstream political debate show.

On a continent that has historically suffered disproportionately as a result of right-wing excesses, something is persuading voters to back far-right parties in growing numbers. But what?

Islamophobia or the economy?

Anti-Islamic sentiment and concerns over immigration levels have appeared at the centre of many far-right political campaigns, leading some to believe that the threat of terrorism and a perceived “clash of civilisations” between Islam and the West is driving the resurgence of the right.

But many experts say that issues closer to home are likely to be behind the parties’ increased popularity in recent years, citing fallout from the financial crisis as a major driver of their success.

“Because of the crisis and dearth of jobs, politicians are playing on emotions to win votes, looking for scapegoats,” says Shada Islam, a researcher at the European Policy Centre in Brussels.

Per Ake Westurlund, the chairman of Sweden’s Socialist Justice Party believes that economic uncertainty facing ordinary Swedes has been a major contributor to the success of the Sweden Democrats.

“I think that the most important thing is the insecurity about the future for more and more people,” he told Al Jazeera. “There is an increasing gap between rich and poor, increased inequality, and there has been no real anti-racist reply against this racist party.”

He says that Muslim immigrants have been blamed for economic pressures facing the country. “The racist parties find any suitable scapegoat,” he said. “In the 1920s or 1930s it was the Jewish population who they attacked. In the last decade, it has been political refugees or asylum seekers, and in recent years it has been Muslims.”

Matthew Goodwin, an expert on far-right politics at the University of Nottingham, agrees that the far-right has shifted the focus of its attacks over time. “The far-right has, over the past couple of decades, effectively adapted its campaigns to different minority groups, whether Roma, whether Muslims or other immigrants,” he says.

How best to respond to the racist and inflammatory rhetoric being peddled by such parties is dividing Europe. Attempts to freeze the far-right out of the debate have failed. The Sweden Democrats were not allowed to show a television campaign advert depicting a pensioner being chased by women in burqas, and despite not being included in televised debates, went on to electoral success.

While far-right parties are still a fringe force in most European parliaments, fears are growing that mainstream politicians are beginning to exploit the electoral momentum that put them there at all.

“One obvious response strategy has been to co-opt the far-right’s issues,” Goodwin says. “So in France for example, you have Zarkozy talking tough on the Roma. But in other countries, we’ve actually seen mainstream parties adopt a very hostile response to the far right.”

But co-opting the politics of the far-right is not without risk. In France, President Zarkozy’s drive against Roma immigrants has set Paris on a collision course with the European Union, and the Swiss government’s controversial decision to hold a referendum last year on whether to allow the construction of minarets on mosques backfired when it was won by the ‘No’ camp, led by the anti-immigration Swiss People’s Party.

Goodwin says that far-right parties are successfully tapping into currents of fear swirling through Europe’s cash-strapped and war-weary populations. “When we ask voters in a range of different surveys about their views about immigrants and about Muslims we can see quite significant pockets of anxiety in populations across Europe,” he says. “These parties are the tip of a much deeper trend.”

It is impossible to tell just how deep this trend runs, but as the Sweden Democrats settle into their  parliamentary seats as a new political force, one thing is clear: It is not just the postmen of Sodertalje struggling to find an appropriate response to the growing momentum of the far-right in Europe.