The Iraqi National Museum has found more than 600 missing artefacts found in a storeroom of the prime minister’s office, two years after the US government returned them to Iraq, officials have said.

Most of the artefacts were among some 15,000 relics looted during the conflict that followed the 2003 US-led invasion that ousted former president Saddam Hussein.

“We found these artefacts in one of the storerooms of the prime minister’s [Nuri al-Maliki] office along with some kitchen appliances. When we opened the boxes we found them,” Qahtan al-Jibouri, Iraq’s Minister of Tourism and Antiquities, told AFP news agency on Monday.

The items, some dating to the third millennium BC, had been stored in a warehouse alongside common kitchen utensils, after being repatriated by the US military.

“When they arrived in Baghdad, the US army handed them over to the prime minister’s office, but the transfer was conducted without any representatives for antiquities and heritage in attendance,” Qahtan Abbas Numan, the tourism and archaeology minister told a news conference at the National Museum in the capital Baghdad.

Numan also said that the boxes they had been transported in were also not properly labelled, so they were stored in a warehouse from autumn 2008.

Eventually, an inquiry triggered by al-Maliki’s office recovered the artefacts.

Iraq, regarded by some historians as the cradle of civilisation, lost part of its national heritage to widespread looting that became a powerful symbol of the breakdown of order following the 2003 invasion.

Two weeks ago, Iraqi officials announced they had recovered more than 500 other artefacts, including the headless statue of Sumerian king Entemena and a chrome-plated AK-47 that belonged to Saddam.

The latest stash include clay slabs, glass cups, rosary beads and other relics from different periods in Mesopotamian history, as well as a Sumarian statue bearing cuneiform writing that was stolen in the 1990s.

“This is a great day for the National Museum,” said Qais Hussein Rashid, the chairman of Iraq’s Board of Antiquities and Heritage.

“These items, which provide an account of the civilisation of Mesopotamia, will finally regain their rightful place in the museum.” 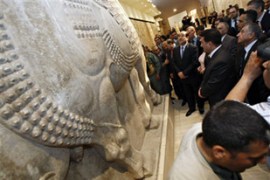 Minister says only fraction of items stolen following US-ivasion have been returned.

Iraqi museum gets priceless pieces back

Three 4000-year-old marble and alabaster seals, recovered from an American scholar after being looted from the Iraq National Museum, have been returned.