The UN chief has called for an urgent global response to the Pakistan flood crisis, calling it the most complex natural disaster in the history of the world organisation.

Ban Ki-moon made the comments seeking extra resources for the South Asian country during a ministerial meeting on the disaster at the UN headquarters in New York on Sunday.

“We are here because the Pakistan floods are one of the biggest, most complex natural disasters we have faced in the history of the United Nations,” he said.

The remarks come two days after he made a global appeal to raise $2bn – the biggest ever disaster appeal in UN history – to deal with the aftermath of Pakistan’s flooding.

The flooding has displaced some 20 million people, many of whom are in need of urgent aid.

The UN appealed for $460m in August but has been forced to quadruple the figure because of the scope of the disaster.

“This new appeal extends the emergency relief to six months and includes the crucial element of early recovery for the next 12 months. I call for your urgent response,” Ban said.

“The floods in Pakistan are a global disaster, a global challenge, and a global test of solidarity.

“Of course, we know this is happening in a part of the world where stability and prosperity are profoundly in the world’s interests.”

Friendly nations and groups supporting Pakistan’s democratic advances promised to give the country millions of dollars more in flood aid.

But several are insisting that Pakistan itself must lead the way on recovery and account publicly for all funds.

The meeting brought together Hillary Clinton, the US secretary of state, and about 25 other senior ministers.

Clinton said the US has now allotted about $340m in disaster relief to Pakistan.

Britain on Sunday doubled its aid to about $200m while the European Union said it has contributed $315m.

But it was unclear whether all the pledges will add up to the $2bn requested by the UN.

Lieutenant-general Nadeem Ahmad, the head of Pakistan’s National Disaster Management Authority, told the top-level UN meeting that his country had only 20 per cent of the food and 20 per cent of the water needed for the 20 million affected people.

Shah Mehmood Qureshi, the Pakistani foreign minister, said the world community should multiply the impact of Hurricane Katrina in the US in 2005 by 100 times to understand the scope of the devastation. 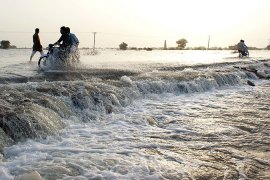 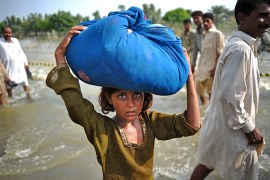 ‘Millions’ without aid in Pakistan

A month into the disaster, new areas are flooded and food fails to reach an estimated three million people. 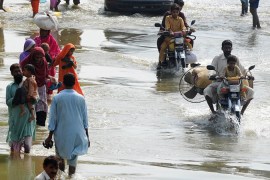 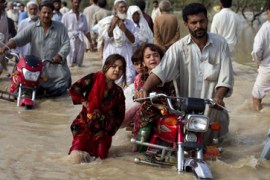 Survivors say government failed to come to their rescue following floods that have affected 2.5 million.