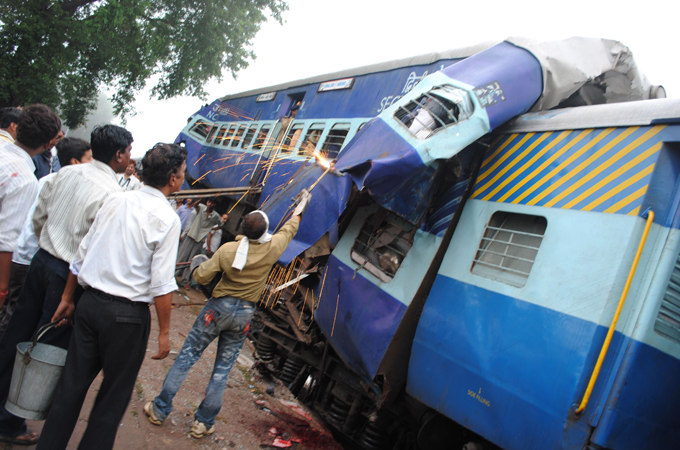 The accident occurred 350km from Bhopal, when a goods train smashed into a passenger train [AFP]

Two trains have collided in bad weather in central India in an early morning accident, leaving at least 20 people dead and 15 others injured, railway and police officials say.

The crash occurred on Monday in the Shivpuri district of Madhya Pradesh, about 350km from state capital Bhopal, when a goods train hit a passenger train waiting at a station.

“The accident took place when a goods train rammed into the stationary Gwalior Intercity Express from the front side at around 4:40am amid heavy rains and poor visibility,” KK Dubey, a West Central Railway spokesman, said.

Rajendra Prasad, a Shivpuri police superintendent, said that a rescue effort was under way at Bhaderwah station, but heavy rain was hampering efforts.

Accidents are common on the Indian railway, an immense network connecting every corner of the country.

In May, nearly 150 people were killed when a Mumbai-bound high-speed passenger express from Kolkata, in the eastern state of West Bengal, veered off the tracks into the path of an oncoming freight train after the track had apparently been sabotaged.

In July, more than 60 people were killed and 165 injured when a speeding express rammed into the back of a stationary passenger train in West Bengal.

The worst accident in India was in 1981 when a train plunged into a river in the eastern state of Bihar, killing an estimated 800 people. 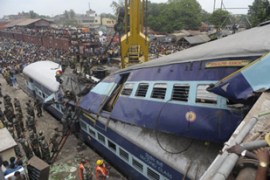 Authorities do not rule out sabotage after one express train runs into another in West Bengal state. 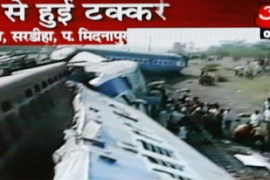 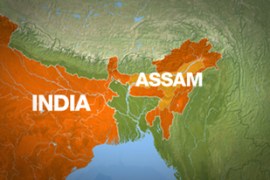 At least three people are killed and scores wounded in blast in India’s Assam state.

Another 10 bodies have been recovered from a train that derailed and toppled into swirling floodwaters in the southern Indian state of Andhra Pradesh, bringing the death toll to 110, an official said.