US officials have declared that BP, the British oil company, has finally sealed the deep-sea well that gushed millions of oil into the Gulf of Mexico for several months.

“We can finally announce that the Macondo 252 well is effectively dead,” retired Coast Guard Admiral Thad Allen, who oversees the US government response to the disaster, said in a statement on Sunday.

Last Thursday, a relief well bored into the bottom of the Macondo well to pump in cement and seal the reservoir for good. BP pumped cement for seven hours on Friday, and finished a pressure test early on Sunday that showed the well was “effectively dead”, Allen said.

BP had pumped cement into the well from the top on August 5. That attempt provided the first cement plug and the second round into the bottom through the relief well was considered the final assurance that the well was plugged for good.

Rich Robson, the offshore installation manager on the Development Driller III vessel, said that while the declaration will be a significant milestone, it would be difficult to celebrate too much given the tragedy of the oil spill.

“It’s kind of bittersweet because we lost 11 men out here,” he said.

“There isn’t going to be any real celebration. To a lot of people, the water out here is a cemetery.”

Barack Obama, the US president whose approval ratings were hurt by public discontent over the government’s initial response to the spill, welcomed the long-awaited development as an “important milestone”.

Obama said his administration was now focused on making sure the Gulf Coast “recovers fully from this disaster”.

“This road will not be easy, but we will continue to work closely with the people of the Gulf to rebuild their livelihoods and restore the environment that supports them,” Obama said in a statement.

The catastrophe began on April 20, when an explosion killed 11 workers, sank a drilling rig and led to the worst offshore oil spill in the US history.

The Gulf well spewed 206 million gallons (780 million litres) of oil before the gusher was first stopped in mid-July with a temporary cap.

Mud and cement were later pushed down through the top of the well, allowing the cap to be removed.

BP is a majority owner of the well and was leasing the rig from owner Transocean Ltd.

The spill posed major environmental challenges and has been an economic nightmare for people along the Gulf Coast.

With oil still in the water – some of it still washing ashore – fishermen are still fighting the perception that their catch is tainted.

The oil spill, which has brought increased governmental scrutiny of the oil and gas industry, also wiped about $70bn from BP’s market value and spurred BP to replace Tony Hayward, its chief executive, with Bob Dudley, an American, effective October 1.  It also triggered civil and criminal investigations.

A costly moratorium on deepwater offshore drilling is still in place as a result of the spill. 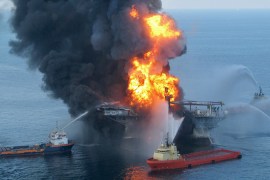 Tony Hayward tells UK panel there is much to learn from Gulf oil spill but says his company has strong safety record. 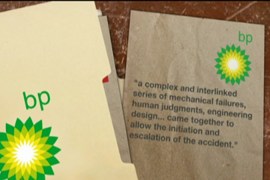 BP’s partners hit back at report which says no single factor caused the April explosion at the Deepwater Horizon rig. 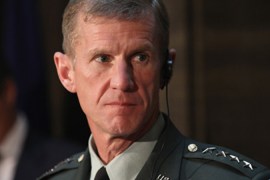