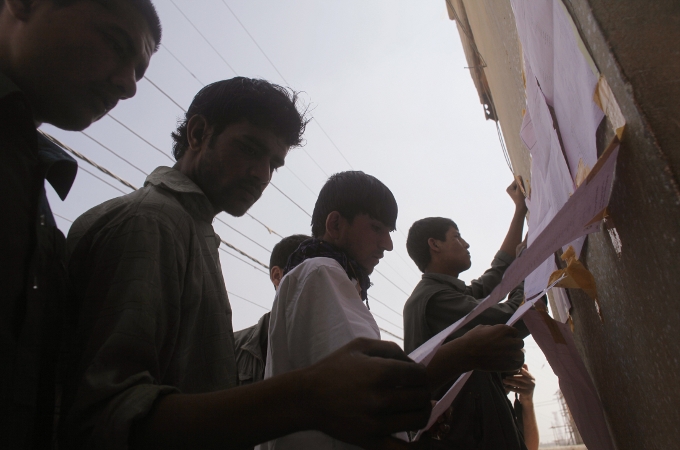 Violence was low, but so was turnout during Afghanistan’s second post-invasion parliamentary election on Saturday. The Taliban and other armed opposition groups caused less chaos and fewer casualties than in previous elections, but it seemed that threats issued over the course of months before the vote – and the generally worsening security around the country – had convinced at least two thirds of the voting population not to participate.

The security situation was quieter than expected: Insurgents staged at least 300 attacks, but fewer than they did in 2009. Casualties were comparatively low, with 24 people killed nationwide.

Turnout had dimmed compared to Afghanistan’s previous elections: 3.68 million ballots were cast, according to the Independent Electoral Commission (IEC), compared with 4.6 million valid votes in last year’s presidential election, and 6.4 million in the 2005 parliamentary vote. The number of cast ballots is an imprecise measure, however, assuming that a significant number of fraudulent ones will be invalidated, as they were last year.

The frenetic pace of election day now gives way to a period of weeks and months of uncertainty as the IEC counts ballots and candidates and observers file fraud complaints. Preliminary numbers are expected on October 1, with final results are not expected until October 30.

More than 100 complaints have already been filed, according to the Electoral Complaints Commission (ECC), the joint Afghan-international body that investigates them. Another 1,300 complaints have been submitted verbally, but the ECC says they will not be reviewed unless they’re put into writing.

“Last year, everything was adjudicated at the head office,” said an ECC official. “But now we’ve got 35 adjudicating bodies. It’s quite difficult getting detailed information; we don’t even have e-mail links with some of the provinces.”

‘Widespread’ but not ‘massive’?

The Free and Fair Election Foundation of Afghanistan (FEFA), the country’s largest domestic monitoring group, said in a statement shortly after polls closed that it had “serious concerns about the quality of the elections.”

FEFA, which had more than 7,000 observers deployed across the country, reported a “worrying number” of government officials interfering in the election process. The group also documented incidents of ballot-stuffing, under-age voting, and proxy voting – when one person votes on behalf of others.

Staffan de Mistura, the United Nations special representative in Afghanistan, said that there were “widespread irregularities” during the vote, but no evidence of what he called “massive fraud.”

That distinction may be academic, though, because under Afghanistan’s “single non-transferable vote” system, candidates do not need a majority to win a seat in parliament. Small-scale acts of fraud – in some provinces, just a few thousand votes – are enough to change the slate of winning candidates.

Press accounts suggested that individual candidates could benefit strongly from acts of fraud. In Uruzgan province, for example, hundreds of ethnic Hazaras reportedly seized a polling centre in the Khas Uruzgan district, and proceeded “to cast 4,200 ballots for their candidate.” That number of votes would equal around 2 per cent of Uruzgan’s registered voter population.

And in Wardak province, the Christian Science Monitor reported that election workers closed down a polling centre in the morning and spent the afternoon hours stuffing ballots. A candidate, Haji Waheedullah Kalimzai, reportedly paid them $200 each to commit the fraud.

Reports of fraud also came from a variety of monitoring organisations, including FEFA and Democracy International, and from the Pajhwok news agency, the country’s largest news service.

Using text messages, Pajhwok reporters filed briefs throughout the day from the around the country; the snippets were then aggregated on the aliveinafghanistan.org website. Small World News, a media company that provides training to journalists in the developing world, is running the Alive in Afghanistan site for Pajwhok.

Danish Karokhel, the Kabul-based director and editor in chief of Pajhwok, told Al Jazeera that the news agency put 100 people in the field: 20 in Kabul and 80 scattered throughout Afghanistan’s 33 other provinces. The Kabul team were all trained journalists on Pajhwok’s staff. In the provinces, there were 35 reporters, four video journalists, and 37 female monitors and other volunteers who had previously been staff reporters.

Karokhel said he trusted in the accuracy of Pajwhok’s quickfire stream of posts, which provided the biggest window onto the vote, but perhaps because of the text-message format, sometimes lacked depth. One tweet, for instance, said that people in Ghazni Province were being forced not to vote but did not specify who was responsible.

A spokesman for the ECC said it will take weeks to finish evaluating all of the complaints it receives.

Though Saturday was a comparably safe 24 hours for Afghan voters, armed groups managed to launch hundreds of attacks, and months of violent threats probably played a role in depressing turnout.

The country’s presidential vote last year, on August 20, was considered the deadliest day of the year. Early reporting suggested at least 30 people were killed, a death toll that later rose above 40.

Afghan government officials differed with Nato headquarters in their estimate of the number of election-day gun battles, rocket attacks and bombings – referred to as “security incidents”. It was unclear if the difference sprung simply from terminology, but both sides agreed that overall violence had decreased from last year.

Wardak said the number of security incidents fell from 422 to 305. But a Nato spokesman told Al Jazeera on Sunday that there were 580 security incidents on election day – 294 insurgent attacks and 286 operations launched by Afghan or Nato forces.

The number of insurgent attacks was a sharp drop from the 479 mounted during the 2009 presidential election. It defied expectations: The Taliban had threatened to disrupt the vote, and international observers warned of major security threats.

“This year, [election day] started in an even more negative atmosphere,” wrote Thomas Ruttig, the co-director of the Afghanistan Analysts Network, in a blog post from Gardez. “Everyone – [the] UN as well as Afghans – warned that massive attacks might happen in Gardez organised by the Haqqani network, and [that] it would be better not to watch any polling centre at all.”

Most of Saturday’s insurgent attacks seemed to have been been rocket or mortar barrages. The New York Times reported that more than 30 rockets hit Kandahar city alone, while Pajhwok reported a five-missile attack in eastern Jalalabad city. Yet most yielded few casualties. The worst single incident appeared to have been a roadside bomb explosion in northern Balkh Province; Pajhwok reported that nine civilians died and a child was wounded.

Despite the drop in election-day violence, months of prior threats seem to have had an effect. Between May 4 and July 15, FEFA documented more than 60 instances of intimidation, the majority of which were Taliban threats to the general population or candidates, warning them not to participate in the election.

Nato also reported that five service members were killed on Saturday – two from an improvised explosive device explosion in the south, two from insurgent attacks in the north and east, and one from a “non-battle injury”.