Pope Benedict XVI has completed a four-day state visit to the UK, with the Roman Catholic Church hailing the trip as a “great success.”

The Vatican said on Sunday that it believed the Pope had reached out to the nation despite anger there at the sex abuse scandal surrounding the Church and weariness about his message.

Reverend Federico Lombardi, the Vatican spokesman, said the UK public had received “with profound interest” the Pope’s warnings over increasing secularisation in society.

Lombardi described the trip as “a spiritual success.”

David Cameron, the prime minister, met with the Pope before his departure from Birmingham Airport, and stated: “Faith is part of the fabric of our country. It always has been and it always will be.”

Cameron added that the visit had made the UK “sit up and think.”

He said that Newman, a intellectual convert to Catholicism, had “outstanding holiness,” and that his teachings are as relevant today as they were more than a century ago.

The Pope renewed his criticism of the abuse of children by Catholic priests, stating at a meeting of Bishops that it “seriously undermines the moral credibility of Church leaders.”

As he met five victims, he apologised for the uncovered sex-abuse of children in the Catholic Church on Saturday, saying that the crimes had caused “immense suffering.”

On the same day the Pope held a prayer vigil in London in front of a crowd of 80,000, however, a significant opposition to the visit manifested itself beforehand. About ten thousand people took to the streets to express their opposition to the Pope.

The visit was also said to have brought Catholics and Anglicans closer together.

Benedict on Friday met with Rowan Williams, the worldwide Anglican leader and Archbishop of Canterbury.

It was the first papal visit to the UK since John Paul II in 1982 and the first ever state trip. 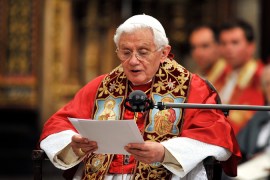 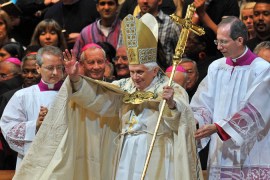 London street cleaners released without charge, with police offering no reasons for their decision. 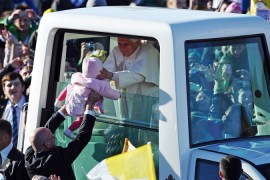 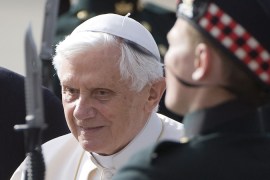 Pontiff’s historic four-day visit could be marred by poor attendances and protests over clerical abuse.