Dozens of Christians have defied police and threats of attack from Muslim groups to hold prayers inside their boarded-up church near the Indonesian capital.

The group held their Sunday service surrounded by hundreds of police and security guards, saying they had as much right as any Indonesian to worship in the Muslim-majority country.

Local officials used bullhorns to remind members of the Batak Christian Protestant Church that they were banned from the site following an attack last week by suspected Muslim activists on two church leaders.

“We just want to carry out our obligations as Christians, but authorities are treating us like terrorists,” Advent Tambunan, a member of the congregation in the industrial city of Bekasi, said.

“There’s no justice for us in this country.”

Police have arrested 10 people following the attack, which left one churchgoer hospitalised with a stab wound.

A local leader of the Islamic Defender’s Front, which has led calls for the Christians to leave, was among those detained.

In recent months, the hardliners have thrown shoes and water bottles at the church members, interrupted sermons with chants of “infidels!” and dumped piles of faeces on the land.

Local officials had seven empty buses on standby outside the Batak Christian’s shuttered church on Sunday, ready to transport them to an alternate site of worship provided by the government.

But members of the congregation, numbering about 100, refused to move.

After lengthy negotiations, they were allowed to carry out Sunday service, with the agreement that they would talk later this week about ways to help defuse religious tensions in the neighbourhood.

Indonesia, a secular country of 237 million people, is the world’s most populous Muslim nation.

Though it has a long history of religious tolerance, a small extremist fringe has become more vocal, and violent, in recent years. 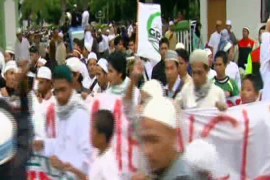 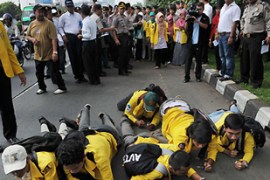 President vows to tackle growing religious extremism in his state of the nation speech. 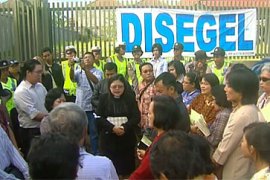