China has suspended high-level contacts with Japan in response to the arrest of a Chinese captain for allegedly ramming his boat against Japanese patrol vessels in disputed waters.

“China has already suspended bilateral exchanges at and above the provincial or ministerial levels,” the Xinhua news agency quoted the foreign ministry as saying.

CCTV, the state broadcaster, said the refusal to release the captain had “already caused serious damage to Sino-Japanese bilateral contacts.”

CCTV also reported that China had suspended talks on aviation issues and postponed a summit on coal.

Zhan Oixiong, the captain, has been held since September 7 when his vessel struck two Japanese coast guard ships.

The incident occurred in the East China Sea, near islands claimed by both countries.

The Diaoyu Islands, called Senkaku by Japan, are also claimed by Taiwan and are surrounded by rich fishing seas, believed to also contain oil and gas resources.

On Sunday, a court in Japan extended Zhan’s detention by 10 days.

Beijing has repeatedly called for his release, and has summoned Japan’s ambassador five times on the issue.

Victor Gao, director of the China National Association of International Studies, in Beijing, said: “Both sides need to stabilise things and use all their wisdom.

“But I don’t think China has any choice if Japan does not release the captain.”

Gao said that there are huge economic interests at stake and that international talks with North Korea, to try to contain Pyongyang’s nuclear ambitions, could be held back due to China not wanting to work with Japan.

“This whole thing may eventually get out of control and China and Japan will be the victims,” Gao said.

Relations between the two nations are typically tense, and since the dispute began the number of Chinese tourists visiting Japan has plunged.

Anti-Japan protests were held in several cities in China on Friday, marking the anniversary of a Japanese invasion in the country in 1931.

Japanese law states that a suspect can be held for up to 20 days before criminal charges have to be filed.

Japan is no longer holding Zhan’s crew and boat. 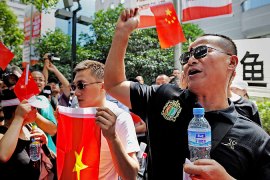