Security forces in Afghanistan are on high alert as voters begin to head to the polls to elect a new parliament amid the threat of violence.

Afghan and Nato officials said an explosion rocked the centre of the capital, Kabul, on Saturday, just hours before polling stations opened at 7am local time (2:30 GMT).

Al Jazeera’s James Bays, reporting from outside a polling station in Kabul, said there were no immediate reports of any injuries from the explosion.

“There was a rocket that hit the capital city, that landed near the main building of state TV, right opposite the main headquarters of the Nato force here in Kabul,” he said.

“We understand there have been a number of violent incidents overnight across Afghanistan. We’re trying to compile the statistics; it’s still a little early to get some indication of the death toll.

“But the Taliban [have said] they will do everything they can to stop this poll.”

A Nato spokeswoman said that the rocket attack appeared to be targeting the International Security Assistance Force (Isaf) headquarters.

“It was a rocket of unknown calibre, it landed in the vicinity of Isaf HQ,” Lieutenant Commander Katie Kendrick, a Nato spokeswoman, told the AFP news agency. “No damage or casualties were reported.”

Six rockets were also fired on the outskirts of the city of Jalalabad, about 130km southeast of Kabul, a police spokesman for Nangahar province.

“Five rockets landed in the farming area on the outskirts of the city, with no casualties. One rocket hit a house in the same area and again there were no casualties,” Abdul Ghafor said.

Police said the pre-dawn blast in Kabul appeared to be a warning from fighters trying to scare people from going to the polls for an election in which widespread claims of fraud, and Taliban intimidation have already thrown the process into doubt.

On the eve of the poll, Taliban figters kidnapped at least one candidate and were blamed for snatching another 18 election workers.

Nato troops have pledged to support Afghan security forces to ensure the polls take place in as normal fashion as possible, and have already taken action against kidnappers, rescuing three kidnapped Afghans in Ghazni province.

Despite the Taliban threats, Hamid Karzai, the president, on Friday called on all Afghans, including members of the Taliban, to vote in Saturday’s election.

“We hope that our people in every corner of our country, in every city of our country and every province will go to polling stations and vote for their favourite candidate and through the vote lead our country to further stability,” he said.

Karzai and Faizal Ahmad Manawi, the head of Afghanistan’s Independent Election Commission (IEC), were among the first to cast their ballot when polls opened in Kabul.

But a high turn-out is unlikely, with many Afghans mistrustful of politicians after last year’s presidential elections were marred by serious allegations of fraud.

“Democracy, what’s that?” Darya Khan, a 40-year-old driver, said. “I’m not going to vote, the people who get elected are just in it for themselves. They are not working to benefit the country, they are not thinking about the poor.”

Others were more hopeful.”I’m happy and ready to take part in [the] election, to choose our own future,” Abdul Qahir, a 31-year-old construction company owner, said after being searched at a checkpoint. “It’s important to vote. We need to elect good people, not warlords.”

Staffan de Mistura, the United Nations’ top diplomat in Afghanistan, has said a turnout of between 5 million and 7 million out of Afghanistan’s roughly 11.4 million registered voters would be considered a success.

Tens of thousands of Afghan security forces have been deployed across the country and police have set up extra checkpoints across the capital, Kabul, to scan for suicide bombers.

With more than 2,500 candidates standing for election, including 400 women, competition between candidates is fierce and poll-rigging has emerged as a very real possibility.

Al Jazeera has uncovered “industrial-scale” production of fake voter registration cards in a number of provinces across the country, prompting fears of a repeat of the mass fraud and vote-rigging that plagued last year’s presidential polls.

“A tape … arrived at our [Kabul] office from one of our teams down south, and they filmed hundreds more of these [fake] registration cards,” our correspondent, James Bays, reported.

“This is not isolated to one or two incidents. It seems that these fake cards are being produced at an almost industrial scale.”

Steffan de Mistura, the top United Nations envoy in Afghanistan, told Al Jazeera that he’s not concerned about the circulation of the fake voter cards. He has been visiting some polling stations in Kabul this morning.

“I looked at the ink, the polling paper, and the way the staff was working,” he said.

“It looked quite professional, but of course, the name of the game is the provinces and the districts. That’s where we have to see how effective the whole process is. We believe it’s improved, but the test will be later on.” 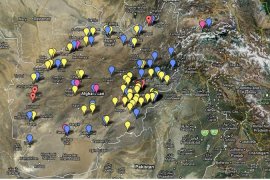 Track violence against Afghan candidates and and review the number of women running with this interactive map. 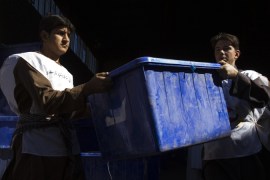 A messy vote: Fraud in Afghanistan

Observers say Saturday’s ballot will be fairer than last year’s, but tally fraud and tampering will still be widespread. 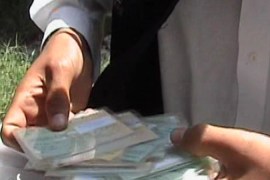 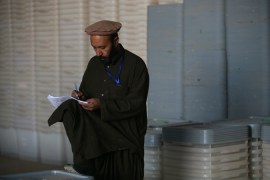