This map tracks recent incidents of violence and intimidation against parliamentary candidates, their campaign workers, volunteers and supporters, and other members of the population who might participate in the election. To let Al Jazeera know about new or unreported incidents, click the “Send Feedback” button. 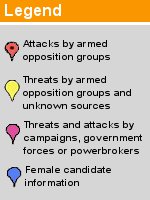 Most of the violence and threats have been attributed by the media and election monitors to the Taliban, though this is a broad description. Some of the threats have also been attributed to the Hezb-e-Islami Gulbuddin, a political and armed group led by Gulbuddin Hekmatyar, a former member of the mujahideen who fought against the Soviet invasion in the 1980s.

The majority of the intimidation and attacks catalogued here have taken place in the insecure southeastern regions of the country, in provinces such as Logar, Paktika, Ghazni and Khost.

The majority of the data has been provided by the Free and Fair Election Foundation of Afghanistan (FEFA), the country’s largest domestic vote-monitoring body.