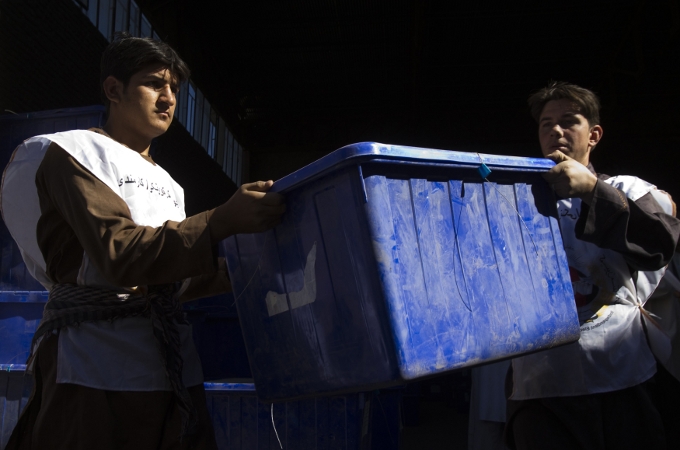 Fraud is inevitable during Saturday’s parliamentary election in Afghanistan, poll workers and international observers say, with even the most optimistic acknowledging that candidates will try to game the system.

Last year’s presidential and provincial council ballots, after all, were marred by widespread misconduct.

The Electoral Complaints Commission, the international body that reviews allegations of fraud, invalidated more than one million ballots from the presidential vote, a decision that nearly forced a runoff election.

This year’s vote is expected to be better, largely because the Independent Electionf Commission (IEC) has implemented a number of reforms aimed at reducing fraud. The panel largely stopped issuing new voter registration cards, for example, to prevent voters from obtaining duplicates, and it has replaced thousands of poll workers accused of misconduct during last year’s election.

But with some level of fraud almost guaranteed, many observers say the real question is how the IEC and the international community will choose to respond, a decision that will go a long way towards shaping Afghan perceptions of the vote.

“It’s practically impossible to stop, given the security situation and the fact that many of the candidates, candidate supporters and IEC staff are preparing for it,” Martine van Bijlert, a co-director of the independent Afghanistan Analysts Network (AAN), said.

“In the insecure areas, there will be ballot-stuffing … in the secure areas you will see tally fraud, intimidation and some small-scale ballot stuffing.”

AAN published a report on Saturday that offered the most detailed accounting to date of fraud from the 2009 election.

Candidates in a number of provinces relied on “bulk vote” tactics, like paying people to vote multiple times using duplicate identity cards. In Kandahar, Paktika and Ghazni provinces, thousands of votes were illegally added to ballot boxes after the preliminary results were announced.

In one particularly glaring example, after the ECC invalidated fraudulent results from 84 polling stations in Kandahar, the total number of votes reported by election officials in the province actually increased.

Staffan de Mistura, the United Nations special representative in Kabul, said on Tuesday that some level of fraud is inevitable.

“Let’s remember, we are not in Switzerland, we are in Afghanistan,” he said, repeating a phrase he has used dozens of times over the last few months.

But he said many of the IEC’s recent reforms will fix the most glaring problems from 2009.

“There are elements that have been substantially improved from previous elections,” de Mistura said.

“Serial numbers, tamper-evident bags, in other words, additional security arrangements around the quality of materials [and] the movement of the materials.”

Those security measures are only as effective as the election officials themselves, though: Tamper-evident bags help poll workers spot fraudulent ballots, but that matters little unless they actually disqualify the ballots.

“In many cases [last year] results were turned in either outside the required tamper-evidence bags or in bags showing clear signs of tampering,” van Bijlert wrote in the AAN report. “In most cases the sheets were simply entered into the count.”

Another concern is the vast number of duplicate voter registration cards in circulation. About 10.5 million people are eligible to vote in Saturday’s election, according to the IEC – yet more than 17 million voter cards have been issued since 2004.

Thousands of fake voter cards have also been issued, as Al Jazeera’s Sue Turton reported from Jalalabad on Thursday, where cards printed in the Pakistani city of Peshawar are available for just 300 Pakistani rupees (roughly $3).

Fake voter cards are available for about $3 each, as Al Jazeera’s Sue Turton reports from Jalalabad

Fazal Ahmad Manawi, the chairman of the IEC, downplayed concerns about the duplicate and fake cards, saying that voters will not be able to cast more than one ballot.

They will mark their fingers with ink after casting their ballots, and Afghan officials say they have upped the amount of silver nitrate in the ink, making it extremely difficult to wash off.

“Let’s say they do get hold of them [fake or duplicate cards], then what is the use of these cards? I think this only has a propaganda purpose, to undermine the election process in one or another way,” Manawi said.

Again, though, the rules are only as effective as the officials enforcing them: International observers documented many instances of “proxy voting” last year, where one voter would use multiple cards to cast multiple ballots – with the permission of poll workers.

“With regard to the procedures and decision-making we think that there are no or very few problems. But in terms of implementation, we might face problems,” Manawi said.

Observers also tout the IEC’s decision not to open more than 1,000 polling centres in particularly insecure areas as an important step towards reducing fraud.

The closures are, admittedly, a crude solution – they could very well disenfranchise tens of thousands of voters – to a difficult problem, that of “ghost” polling centres, the thousands of locations the government could neither monitor nor secure last year.

In many cases it was unclear whether they actually opened on election day, but they reported results nonetheless, often in very large numbers.

“The number of polling centres is actually an advantage, because it eliminates the polling centers that were used last year as vehicles for ballot stuffing and other kinds of fraud,” said Glenn Cowan, the co-founder of Democracy International, a monitoring group that is observing the election. “Those thousand or so polling centres were responsible for most of the industrial-level fraud we saw last year.”

Cowan predicted that many observers probably would be “reluctant” to discuss reports of fraud for several weeks after the vote. “I think given some of the dysfunction last year, everyone’s going to be very careful in what they say after the election,” he said.

But analysts in Kabul say that would be a mistake. US and UN officials rushed to declare last year’s election a success just days after the vote, despite widespread reports of fraud. Their proclamations were greeted with cynicism by many Afghans, and helped to fuel a perception that the fraud was somehow sanctioned.

“If the IEC deals with the fraud in a more consistent and transparent way, and there are indications that they might, the election could look different,” van Bijlert said. “[If] people believe the government or IEC have somehow orchestrated the fraud, [that] is probably more damaging than a vote that is simply very messy because everyone has tried to manipulate it.”