The most senior state inspector in South Korea has been appointed the country’s prime minister, after a previous nominee quit over claims of misconduct.

Kim Hwang-sik, who currently heads the Board of Audit and Inspection, a body overseeing the conduct of government agencies and officials, was picked for the post by Lee Myung-bak, South Korea’s president.

“We expect to expand the culture of change and reform with the youth and vigour meeting the expertise and experience of the existing cabinet,” Hong Sang-pyo, a presidential spokesman, said on Thursday.

Kim was a supreme court judge from 2005 to 2008 before moving to his present role. His appointment is subject to a parliamentary approval.

The prime ministerial post is largely ceremonial with little decision-making power, but the person holding it leads the country if the president becomes incapacitated.

Last month, Lee named a former provincial governor but the appointee withdrew from consideration in the face of a growing controversy over ethical standards and alleged misconduct.

If Kim is successful, he could emerge as a leading candidate in the next presidential election, due for 2012.

In another move, Lee appointed Lee Jae-oh, a close political confidant and a veteran politician, as minister without portfolio. He will be charged with pushing through the president’s stalled domestic agenda.

Lee has made it a top priority for his government to create 200,000 jobs this year and vowed to clean up bureaucracy, cut taxes and reform the country’s rigid labour market.

South Korea has pulled out of the global financial crisis ahead of other countries and has already been tipped to enjoy the fastest growth next to Turkey this year among members of the Organisation for Economic Co-operation and Development (OECD).

Asia’s fourth-largest economy grew 7.6 per cent in the first half of this year over a year earlier – the fastest in a decade – but growth is still led mostly by big exporting firms and the job market has yet to fully recover. 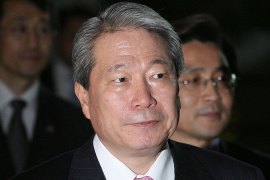 Foreign minister Yu Myung-hwan tenders resignation over allegations of nepotism in controversial hiring of his daughter.