Pope Benedict XVI has arrived in the United Kingdom for a controversial four-day visit likely to be beset by protests over the Catholic Church’s record in dealing with child abuse allegations, and pre-empted by a diplomatic gaffe made by a close aide to the Pope.

The pontiff touched down in Edinburgh, Scotland on Thursday, where he will receive an official welcome from Queen Elizabeth II, before travelling to Glasgow where he will hold an open-air mass.

The highlight of the trip, the first papal visit to the UK in 28 years, will be a beatification mass in Birmingham for 19th century English cardinal John Henry Newman.

It will also feature symbolic prayers with the Archbishop of Canterbury Rowan Williams, the head of the world’s Anglicans.

But the visit has come under fire from campaigners complaining that $18m of British taxpayers’ money is being used to fund the state visit while the church is still under fire over its handling of clerical abuse cases across the world.

Margaret Kennedy of Ministry and Clergy Sexual Abuse Survivors said that victims would demonstrate as the pope travelled around the country.

“We have been refused three times access to the pope,” she said.

“In other words, this visit means that the only way survivors can meet the pope is by protesting in the street.”

Peter Saunders, the chief executive of the National Association for People Abused in Childhood, urged Benedict to do more to help the victims of clerical abuse and said that he hoped the issue would be addressed in the coming days.

“I would tell him that I was sick and tired of telling my story of abuse, because everytime I tell it I relive some of it, but the reason I have to keep telling it is that we’re not doing enough to support survivors of abuse and not doing enough to protect victims,” said Saunders, who remains a Catholic despite being abused as a boy.

“And I would tell the Pope what it was actually like to be abused and how it left me feeling.”

Other opponents of the visit, including human rights campaigners and secularists, are angry at the Vatican’s stance on homosexuality, abortion and contraception, among other issues. They have organised a “Protest the Pope” march for Saturday.

The Catholic Church acknowledged that there was some “hostility” brushed off the planned protests.

“I think everywhere there are critics to the Catholic Church, to the proposals of church, but this is rather normal, and we are not surprised by this,” Federico Lombardi, the Vatican spokesman, told Al Jazeera.

“I don’t think that it’s very wide or diffused hostility.”

The Vatican has also sought to play down comments by Cardinal Walter Kasper, who recently retired from the Vatican’s office in charge of relations with other Christian denominations, comparing the UK with a developing nation.

“Britain today is a secularised, pluralistic country. If you arrive at Heathrow airport, you sometimes think you had arrived in a third-world country,” he reportedly told Germany’s Focus magazine this week.

Lombardi said Kasper’s comments were not intended as a slight, but simply reflected the cultural diversity instantly evident upon landing in the capital.

He intended to refer to “a cosmopolitan reality, a melting pot of ordinary humanity and all of its diversity and its problems,” Lombardi said.

Kasper had been due to take part in the visit but pulled out last minute citing illness.

Benedict’s visit to the UK is the first by a pontiff since Pope John Paul II made a non-state pastoral visit in 1982. Benedict’s visit has failed to excite the public imagination like that of his predecessor.

An Ipsos Mori poll conducted for the Catholic magazine The Tablet and published last week revealed widespread indifference among Britons, with 63 per cent neither in favour nor against the visit.

Disappointingly for organisers, this has been reflected in ticket sales for the planned masses. Only 55,000 people are expected at the main event in Birmingham which is able to host 80,000 worshippers.

The first event at Bellahouston Park on Thursday, which will include performances by an 800-strong choir and Britain’s Got Talent star Susan Boyle, might be one-third empty.

Pilgrims have been asked to pay up to $39 to attend the masses as a contribution towards the cost of the visit. 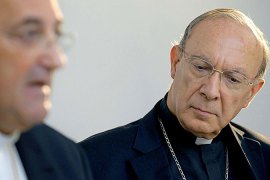 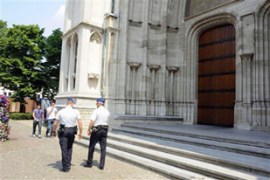 Police raid on bishops’meeting in connection with paedophilia probe criticised. 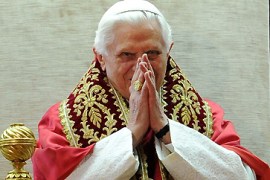 Benedict XVI vows to ensure that abuse of children by priests does not occur again.

Pope accepts resignation of bishop after he admits sexually abusing a young boy.