Hundreds of thousands of Mexicans have taken to the streets of major cities to celebrate 200 years since the start of the independence war against Spain, the former colonial power.

Planes painted the sky with the national colours of green, white and red as thousands of Mexico City residents watched a huge parade on Wednesday.

Felipe Calderon, the president, capped the evening by ringing the original independence bell from a balcony in the Zocalo square and delivering “El Grito,” patterned on founding father Miguel Hidalgo’s 1810 call to arms against Spain.

Hundreds of smaller celebrations were held in other parts of the country.

However, in some cities where security has deteriorated due to the country’s drug-related violence,  festivities were more subdued.

The grito was cancelled in Ciudad Juarez, Mexico’s most violent city, for the first time in its history. But residents in the border city still showed their patriotism by hanging Mexican flags from their roofs and hosting family dinners.

In the western city of Morelia, the scene of a cartel-related grenade attack that killed eight during the 2008 independence celebration, barely 2,000 showed up at the main plaza for a “grito” that once drew tens of thousands.

About 74,000 security forces were deployed across the country, including snipers on Mexico City rooftops.

The interior department said there were no attacks against Wednesday’s celebrations. But prosecutors in the Caribbean coast resort of Cancun said they were investigating whether six men detained with assault rifles and hand grenades had planned an assault on bicentennial festivities. 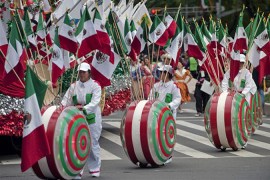 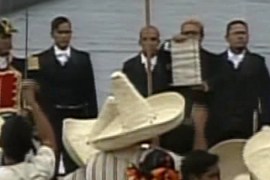 Mexico celebrates 200 years since independence from spain amid threat from drug cartels.