At least 10 people have been killed in a blast on board a minibus in southeast Turkey, local officials say. At least three others were injured.

The incident occurred on Thursday near the village of Gecitli in Hakkari province, bordering Iran and Iraq.

Security officials said a remote-controlled explosive device hid on the road had caused the blast.

Muammer Guler, the governor of Hakkari, said that in addition to those killed, four others, including a baby, were injured in the explosion.

He said Turkish troops launched an operation to hunt down Kurdish fighters believed to be behind the attack.

Kurdistan Workers Party (PKK) fighters have frequently carried out attacks in the region in the past, but such attacks generally target the military.

“On first glance, this had the hallmarks of what we’ve seen in the past, of attacks on vans carrying soldiers on military supply routes,” Al Jazeera’s Anita McNaught said, reporting from the city of Van, about 100km from where the blast happened.

“But this appears to have been a civilian bus, and as such poses a number of puzzles. The PKK on the whole don’t tend to target civilians, so are we looking at a change in tactic, or an accident? Or, as always a possibility in Turkey, is this a third actor, taking a civilian target on in order to create instability and cast the PKK or another actor in a bad light?”

Only last month did the PKK declared a ceasefire, which is not due to expire until September 20.

Before the ceasefire deal was struck, there had been an upsurge in violence since June, when the PKK ended a previous 14-month unilateral ceasefire.

Several thousand PKK fighters are based in the mountains of northern Iraq, from where they regularly launch raids in southeast Turkey.

The group, listed as a terrorist group by Turkey and much of the international community, took up arms in their fight for autonomy in 1984. More than 40,000 people, mostly Kurds, have since died in the fighting. 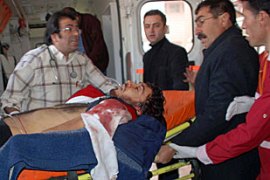 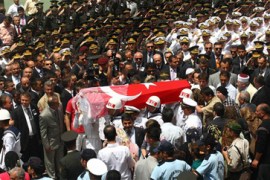