A conservative “Tea Party” favourite has won the Republican senate primary in the US state of Delaware, in a major upset to the Republican party’s chances to recapture the US Senate in the upcoming November elections.

Christine O’Donnell defeated Mike Castle, a nine-term Republican representative, a fixture in Delaware politics for a generation and a political moderate.

Republican Party officials, who had touted Castle as their only hope for winning the seat in the Democratic-leaning state in Tuesday’s primaries, made clear as the votes were being counted they would not provide O’Donnell with funding against Democrat Chris Coons if she won the primary.

However, O’Donnell shrugged off the likelihood the committee would not spend any money on her, telling CNN news channel: “They don’t have a winning track record this season.”

“The people of Delaware have spoken. No more politics as usual,” O’Donnell told supporters at a victory rally. “The cause is restoring America.”

The loss by Castle, who had been expected to cruise to victory in Delaware’s November 2 election, gave Democrats new hope in the state and bolstered their chances to retain control of the senate.

Republicans must pick up 10 Democratic seats to reclaim the Senate, and Delaware was once considered to be safely in the Republican column with Castle as the candidate. Without Castle, Coons becomes at least a slight favourite to win the Senate seat in November.

James Hohmann, a reporter for Politico publication, in Washington, told Al Jazeera the win means that Republicans have almost no chance to taking control of the Senate in November.

“It is a huge victory for the Tea Party,” Hohmann siad.

“These people were always there but they have mobilised in a way they hadn’t in past elections and they’ve been wiling to challenge the powers that be within the traditional party structures.

“They are really frustrated. They feel they’ve lost control of government and that the Republican party, which they’ve always been part of, hasn’t been responsive to them.”

Castle is the eighth Senate candidate supported by the national Republican campaign committee to lose a primary this year, and the result was perhaps the biggest display yet of anti-Washington anger.

O’Donnell, the winner in Delaware, was also backed by Palin.

Paladino, who pledges to spend up to $10m of his own money, will be a huge underdog in the November race against Democrat Andrew Cuomo.

US representative Charles Rangel of New York, a veteran of 40 years in the House, survived a Democratic primary challenge despite an ethics scandal.

He awaits trial by his House colleagues on 13 alleged violations of House rules.

The string of victories by Tea Party candidates was fuelled by broad voter dissatisfaction with Barack Obama, the US president, and the government in Washington.

The Delaware primary fight had gained new urgency after last month’s upset of Republican Senator Lisa Murkowski of Alaska showed that no incumbent was safe in a year when seven had lost congressional primaries.

Democrats hope the Republicans’ shift to the right and the nomination of outsider candidates in Nevada, Kentucky, Colorado and elsewhere will help them in November by alienating moderates and energising Democrats in those crucial races.

Polls show tight Senate races in all those states. Senate Democratic leader Harry Reid, considered politically dead earlier in the year, is in essentially a dead heat with Tea Party-favourite Sharron Angle in Nevada, according to a Reuters/Ipsos poll on Tuesday.

The rise of the Tea Party generated high Republican turnout in the primaries and created a broad advantage for Republicans in enthusiasm about voting, which Democrats fear could hamper their turnout. 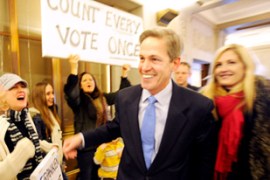 Minnesota’s supreme court upholds election of Al Franken to the US upper house. 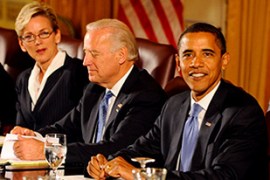 President-elect makes first public appearance since his victory in US elections.