Somalia’s prime minister could be forced from his post amid an escalating dispute with the Horn of Africa nation’s president.

Sharif Ahmed, the Somali president, called for “changes” to the UN-backed transitional government when parliamentarians met in Mogadishu, the Somali capital, on Wednesday.

A motion calling for a vote of no-confidence in Omar Abdirashid Sharmarke, the prime minister, was then put forward and MPs will return on Thursday so the ballot can take place.

Local media reported that Sharmarke had met ministers and MPs at the presidential palace in Mogadishu on Tuesday to discuss the dispute with Ahmed and said he would welcome a resolution to the situation but would not resign.

“The dispute could not come at a worse time, the current situation in the country can not withstand such a fallout, during my travel abroad the dispute became even worse but I do not intend to resign, the parliament has not voted to withdraw its confidence,” Sharmarke said.

“That is why I am carrying on my duties. The parliament should be in full control over government bodies – that is the only way out of this crisis.”

The president previously moved to oust the prime minister in May but failed to win parliamentary support for his removal.

The rift between Sharif Ahmed and Sharmarke has worried United Nations, African Union and regional officials, prompting them to warn that the dispute threatens the already fragile government and would assist groups seeking to topple the administration.

“The current divisions between the leadership of Somalia’s Transitional Federal Institutions (TFIs) are unhelpful and potentially very damaging,” a joint statement was signed by Augustine Mahiga, the UN chief’s special representative for Somalia, Boubacar Diarra, his counterpart from the African Union, and Kipruto arap Kirwa from the regional body IGAD, said.

“Those who stood to gain the most from the current divisions were the extremists who were fighting to take control of the country.”

The three diplomats visited the Somali capital last week to try to mediate between the leaders but as they were holding talks with Sharif the airport where they were meeting came under attack from armed men and suicide bombers.

The attack was blamed on the al-Shabab group, which has vowed to topple the transitional government.

The government holds little sway beyond a few blocks of the capital, while vast areas of the city and the country are under the control of al-Shabab and other militia groups.

Mogadishu witnesses almost daily clashes between the groups and government forces backed by a contingent of more than 5,000 African Union troops.

The transition period set out for the Somali government, which came to power in 2009, ends next August, but the UN secretary-general said on Tuesday that the tasks it was established to achieve remain largely unachieved.

“As Somalia’s transition period approaches its end, I am concerned that the transitional agenda remains largely unfulfilled,” Ban Ki-moon said in a report to the UN security council. 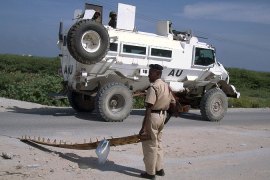 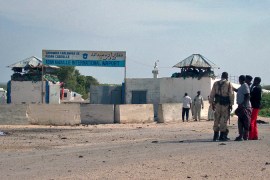 At least 14 people, including AU peacekeepers, killed in bomb blasts at airport in the capital Mogadishu. 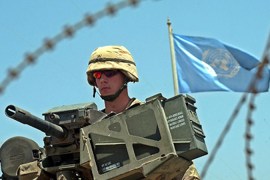 Caught between arms and politics