The French president has hit back at criticism from the EU’s justice commissioner over his government’s crackdown on Roma, as a Europe-wide row over the issue continues.

Nicolas Sarkozy is reported to have said that Vivian Reding, the EU justice commissioner, should host the Roma in her own country, Luxembourg, after she described French expulsions of the ethnic group as a “disgrace”.

According to Bruno Sido, a senator from France’s governing UMP party, Sarkozy “said France was irreproachable in the matter but that if the Luxembourgers want to take them he had no problem”.

“He said that our policy is right and … it’s scandalous that Europe express itself like this on what France is doing,” Sido said.

In remarks made on Tuesday, Reding said that France could face legal action over its expulsion of hundreds of Roma, saying it was a situation she “had thought Europe would not have to witness again after the second world war”.

“This is not a minor offence in a situation of this importance,” she said.

“After 11 years of experience in the commission, I even go  further – this is a disgrace. Discrimination on the basis or ethnic origin or race has no place in Europe.”

But Pierre Lellouche, France’s European affairs minister, said the suggested comparison between dismantling Roma camps and the actions of the Nazis was unfair.

“A plane ticket back to the European Union country of origin is not the same thing as death trains and the gas chambers,” he said.

“I cannot let Mrs Reding say that France in 2010, in its handling of the Roma issue, is the same as Vichy France.”

Jose Manuel Barroso, president of the European Commission (EC), said that Reding had not intended to “establish any parallels between what happened in the second world war and the present”.

But he gave his backing to her criticism, saying: “Prohibition of discrimination based on ethnic origin is one of the EU’s fundamental values and the EU will do whatever is necessary to ensure respect for these principles.”

He said the EC would conclude its evaluation of the matter within the next two weeks.

Meanwhile, a federation of Roma civic organisations in Romania have hailed Brussels’ threat of legal action, saying the body was sending a “powerful message that the fundamental rights of Roma must be respected”.

“Since the circulars of the French authorities proved to be xenophobic and racist, we hope that they will cease the ‘priority’ evictions of Roma,” a statement from the federation of 22 non-governmental organisations said.

Germany has also given its backing to the EC’s stance on the issue.

France has faced international criticism for its deportation of around 1,000 Roma to Romania and Bulgaria in August.

But authorities have denied that the expulsions targeted an ethnic group, saying they were on a case-by-case basis. 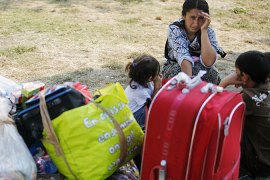 EU commissioner says France should face legal action for expelling of hundreds of Roma, calling the policy a “disgrace”.