Yukiya Amano, the head of the UN’s nuclear watchdog, has said he regrets Iran’s decision in June to bar two experienced nuclear inspectors from the country, saying repeated rejections of his agency’s staff were hindering their work.

Iran has accused the two experts from the IAEA (International Atomic Energy Agency) of giving “false information” about its nuclear programme.

Amano told a meeting of the IAEA’s 35-nation governing board in Vienna, the Austrian capital, on Monday that he had full confidence in the inspectors’ “professionalism and impartiality”.

“I learned with great regret about Iran’s decision to object to the designation of two inspectors who recently conducted inspections in Iran,” he said.

The dispute over the inspectors has added to international concern about Iran’s nuclear energy programme, which some Western powers suspect is aimed at developing nuclear bombs.

Tehran denies this, saying it is solely for generating electricity.

Apart from the two barred in June, Iran also refused access to a senior inspector in 2006 and has objected to a number of other appointments in the past.

“… Iran’s repeated objection to the designation of inspectors with experience in Iran’s nuclear fuel cycle and facilities hampers the inspection process,” Amano said, according to a copy of his speech provided to reporters outside the closed-door meeting.

He urged Iran to reconsider a decision in January 2007 to reject 38 agency inspectors.

Nackaerts becomes head of safeguards, the department responsible for verifying that countries’ nuclear activities are exclusively peaceful and not diverted for military purposes.

Heinonen, 63, stepped down at the end of August after five years in the role and nearly 30 years in the agency.

Nackaerts, who currently oversees inspections in Iran and elsewhere in the Middle East as well as South Asia and Africa, joined the IAEA in 2006, when he was appointed Heinonen’s deputy.

Prior to that, he was head of safeguards inspections at the European Commission.

Amano said on Monday that his agency was looking into a report by by a dissident Iranian group that it had evidence of a new, secret underground uranium enrichment site in Iran.

The head of the IAEA urged Tehran to implement the UN nuclear watchdog’s rules obliging it to inform the agency before it starts any construction work of a new facility.

“We are aware of this information [from Iranian dissidents] through media reports and we are now assessing this information. But at this stage we do not have anything more to share with you,” Amano said.

He said the IAEA had not received prior information from the dissident group about its assertions.

Exiled Iranian dissidents said last week the information came from a network of sources inside Iran affiliated with the exiled opposition National Council of Resistance of Iran and the People’s Mujahideen Organisation of Iran, an armed movement opposed to the Islamic Republic’s government.

It said the site was intended as a facility to refine uranium deep under a mountain near Qazvin, about 120km west of Tehran, and was about 85 per cent complete.

US officials said on Thursday they have known about the facility for years and have no reason to believe it is nuclear.

Iran has denied the dissidents’ accusations.

Glyn Davies, the US ambassador to the IAEA, urged Arab states on Monday to withdraw a resolution calling on Israel to sign an anti-nuclear arms treaty, warning it would send a negative signal to Middle East peace talks.

Arab countries, backed by Iran, are seeking to build on a victory at an assembly meeting of the IAEA last year when they narrowly won support for a non-binding resolution calling on Israel to join the Nuclear Non-Proliferation treaty (NPT).

They are expected to propose a similar text to this year’s meeting of the 151-nation assembly starting on September 20, diplomats say.

The US says that zeroing in on Israel, widely believed to be the region’s only nuclear power, could jeopardise an Egyptian-proposed conference in 2012 to discuss creating a Middle East free of weapons of mass destruction.

Davies said it may also have an impact on the relaunched, US-backed peace talks between Israel and the Palestinians.

“We need to send a positive impulse to that broader peace process, not a negative one,” he told reporters on the sidelines of Monday’s IAEA governing board, which takes place in the week before the assembly session.

Isreal condemned last year’s resolution urging it to accede to the 40-year-old nuclear NPT, saying it was backed by adversaries that question its right to exist.

Israel, which would have to forswear atomic arms and place all its nuclear facilities under the IAEA’s watch if it signed the NPT, says full Middle East peace is a condition for it to join.

The US alarmed Israel in May by backing Egypt’s initiative for the 2012 conference, but the administration of Barack Obama, the US president, has since pledged to keep Israel from being singled out. 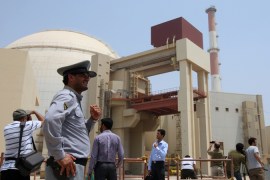 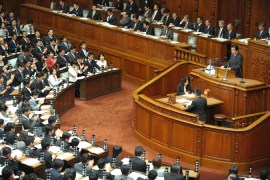