The Nigerian government is struggling to contain a cholera epidemic that has killed nearly 800 Nigerians in two months.

About 13,000 people have been sickened, according to the nation’s health ministry, and poorly funded clinics are jammed with patients.

The epidemic, reportedly the worst in nearly two decades, has also spread to neighbouring countries, killing nearly 400 people in Cameroon and more than 40 in Chad. Cases have also been reported in Niger.

However, Doctor Henry Akpan of Nigeria’s health ministry, described the situation as “under control” in the country.

“We’re not having new deaths anymore,” he told Al Jazeera on Friday.

“We’re still having cases but the cases have been contained and we have a lot of centres where people get treatment.”

In the northern state of Bauchi, health workers in surgical masks dumped chlorine tablets into wells and sprayed anti-bacterial solution on the narrow dirt streets of Ganjuwa district.

Musa Dambam Mohammed, a Bauchi state health official, said the local government has chlorinated every well in the region and provided infomation to the public about how to avoid contracting the illness.

However, the chlorine will wear off over time, leaving the wells again susceptible to cholera.

Cholera is a highly contagious infection that causes diarrhoea, and can lead to severe dehydration and possible death.

It is is easily preventable with clean water and proper sanitation. But in Nigeria, almost half the country’s 150 million people lack access to just that, according to the World Health Organisation.

At a maternity clinic and a hospital in Ganjuwa, small children were being hooked up to IV tubes with doctors trying to save them by rehydrating them intravenously.

As all the beds in the wards were occupied, doctors had to put patients into storerooms and concrete hallways wet with human waste. Many were put on simple foam mattresses, with plastic buckets underneath to catch the waste that drains off.

The current outbreak is the worst in Nigeria since 1991, when 7,654 people died, according to the WHO. 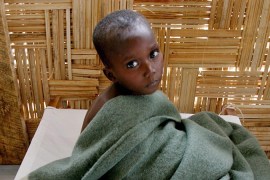 Hundreds of confirmed cases of the highly contagious disease reported from Chad, Nigeria and Cameroon.