Julia Gillard, Australia’s prime minister, has reshuffled her cabinet after winning last month’s elections by a narrow margin, which allowed her to form a minority government.

Gillard announced on Saturday that she would be giving the post of foreign minister to Kevin Rudd, her predecessor and fellow Labor member, who she ousted from leadership of the party and government in June.

Smith has served as foreign minister since Rudd won national elections in 2007.

The defence ministry post had been vacant since John Faulkner announced he was stepping down and “moving to the backbench” ahead of the August 21 poll.

Gillard reshaped her cabinet after forming a minority government last week with the support of three independen politicians and a member of parliament from the Greens party, after polls in August ended with a hung parliament.

As the country’s first female prime minister, Gillard took the Labor leadership from Rudd after he lost the support of factional colleagues.

The prime minister said her deputy, Wayne Swan, would continue as Treasurer while Penny Wong, who had managed Rudd’s ill-fated climate change response as minister for that portfolio, will take on
finance.

Martin Ferguson will remain minister for energy, resources and tourism while Craig Emerson will head to trade and Chris Evans, formerly immigration minister, will become the minister for jobs, skills and workplace relations.

“The new ministry will be dedicated to the development of a national response to climate change driven by a deep and lasting consensus of the Australian people,” Gillard said in a statement.

Chris Bowen will become minister for immigration  – a key issue in Australia where the increasing numbers of asylum seekers arriving by boat is believed to have contributed to dwindling support for Labor. 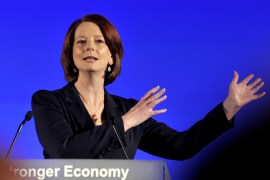