Philippine authorities have acknowledged that some of the tourists taken hostage in a bus standoff last month may have been shot by police in the botched rescue.

Until now, Manila police had said officers did not kill any of the hostages. The driver of the bus also told investigators that the hostage taker shot each of the passengers at close range.

However, on Thursday, Leila de Lima, the justice secretary, who is leading an official inquiry into the August 23 incident, said there was a “big possibility” that some of the passengers in the bus died from “friendly fire”.

Lima said that forensic evidence seemed to contradict the driver’s account. The number of bullets found in the bus did not match the number from the hostage-taker’s gun, she said.

Rolando Mendoza, a former police officer who was apparently upset about having lost his job, took hostage a busload of tourists from Hong Kong.

Four men and four women were killed in the standoff when police commandos stormed the bus and killed the hijacker, prompting criticism from China and elsewhere that the Philippine force was ill-equipped to handle hostage situations.

Mendoza had previously released nine of the hostages, including a mother and her three children, a man with diabetes and two photographers. The bus driver escaped.

Police officials had said snipers positioned to target the hostage-taker were the only ones who fired at the bus.

“From what we see from the results of the bullet trajectory examination, there were certain shots that came from afar, not all came from the snipers because we know where the snipers were,” de Lima said.

Witnesses said Mendoza was initially willing to co-operate, but he was shot dead by police after authorities say he became violent and started shooting hostages.

De Lima, who sits on a panel reviewing the hostage rescue operation, said blood would have splattered all over the seats and windows of the bus if the hostages were shot at close range.

Dried blood was found only on the seats and floor of the bus.

In an interview with local television anchors aired on Thursday, Benigno Aquino, the Philippine president, said his government had begun efforts to improve police capability to handle similar
hostage crises in the future.

“Our government is now focused on taking the necessary steps to prevent this tragedy from happening again,” Aquino said.

“We are also examining our internal processes and crisis management protocols to see how they can be improved.”

Ramon Casiple, a political analyst, told Al Jazeera Aquino’s handling of the investigation has not damaged his image.

“He was very candid in this interview, this gives the public an image of a man in control and, of course, there is this readiness to accept responsibility,” Casiple said.

“You can interpret this as a political move to maintain the endeavour of political trust that the people have in him and regain popularity.”

Aquino came under heavy criticism for his handling of the bus hijacking, casting doubt on his ability to
deliver promises of enforcing the law and improving security. 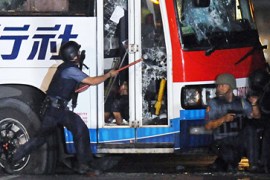 Flags fly at half mast as killing of tourists by hijacker is investigated. 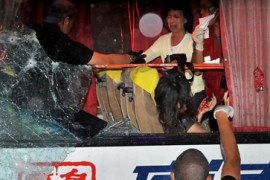 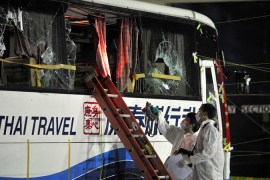 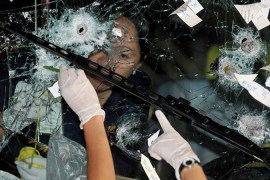