The Obama administration has said that it is concerned about the proposed burning of the Quran by a US church group.

Hillary Clinton, the secretary of state called on Tuesday a Florida church’s threat to burn copies of the Muslim holy book to mark the ninth anniversary of the September 11, 2001 attacks a “disrespectful, disgraceful act.”

“I am heartened by the clear, unequivocal condemnation of this disrespectful, disgraceful act that has come from American religious leaders of all faiths,” Clinton said in remarks at a State Department dinner she hosted in observance of Iftar, the breaking of the daily fast during the Muslim holy month of Ramadan.

Earlier on Tuesday, the White House said that it supported recent comments from General David Patraeus, the chief commander of US and Nato troops in Afghanistan, that the torching could put US troops in that country at risk.

A Church group in Florida is planning to burn copies of the Islamic holy book on Saturday, the ninth anniversary of the September 11 attacks.

Patraeus said that the plan was disrespectful and could endanger Western troops fighting the Taliban and al-Qaeda in Afghanistan.

Patraeus said that the move could hurt attempts by Barack Obama, the president, to reach out to Muslims around the world and lead to retaliation attacks against US troops in Afghanistan.

“I strongly condemn that … I think such actions are in a strong contradiction with all of the values we stand for and fight for,” he told reporters before a meeting with Obama in Washington.

“Of course, there is a risk it may also have a negative impact on the security for our troops.”

An angry protest was held on Monday in Afghanistan against the plan, and demonstrations were also seen in Indonesia, the world’s most populous Muslim nation.

However, the Dove World Outreach Centre, in Gainesville, Florida, which is said to have about 50 members, said that they would still go ahead with the torching.

Terry Jones, the Church pastor, said he would go ahead with the plan in spite of the government’s concerns.

Jones said the move aimed “to remember those who were brutally murdered on September 11”, and to send a warning “to the radical element of Islam.”

Last January, Afghan troops shot and killed eight protesters and wounded 13 more in a riot sparked by a report that foreign troops had desecrated the Quran during a raid in southern Helmand province. A Nato spokesman refuted the report.

Meanwhile, Eric Holder, the US attorney general, met on Tuesday with religious leaders to discuss recent attacks on Muslims and mosques around the United States.

The meeting was closed to reporters, but a Justice Department official who was present confirmed that Holder said the plan to burn the holy book was idiotic.

The official, who requested anonymity because the meeting was private, also said Holder was quoting Petraeus when he used the word “dangerous.”

The broad coalition said in a statement prior to the meeting that they would examine how the Department of Justice “can take against rising anti-Muslim hate and acts of violence and intimidation against American Muslims.”

“Having spoken to many families across the country over the last  few weeks, I have heard many Muslim Americans say they have never felt this anxious or this insecure in America since directly after September 11,” Ingrid Mattson, head of the Islamic Society of North America and one of the leaders at the meeting with Holder, said. 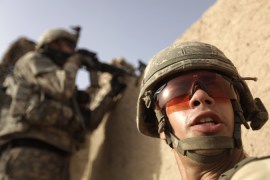