Congo hosts the largest and most costly UN peacekeeping mission in the world, but the mass rape attacks happened just 30km from a UN base some time between July 30 and August 3 in the North Kivu region.

“Our actions were not adequate, resulting in the unacceptable brutalisation of villages in the area,” Atul Khare, the under-secretary general for peacekeeping operations, told the UN Security Council on Tuesday.

He said that government of the DRC holds the primary responsibility for security in the area, but acknowledged that “Clearly, we have also failed”.

The area was reportedly over-run by rebels from neighbouring Rwanda and Congolese Mai Mai militia.

On July 30, the day the rapes began, the UN mission in North Kivu apparently received an e-mail warning that rebels had moved into the town and one woman had been raped there.

But the UN did not report it until ten days later.

Al Jazeera’s Cath Turner, reporting from the UN in New York, said the response of peacekeeping forces was “the biggest contention in this whole controversy”.

Khare also wants to improve communications in the area as “there is next to no mobile phone coverage. The UN wants to put in signal towers … so it can better communicate with the troops there” in addition to improving early warning systems, our correspondent said.

Margaret Wallstrom, the UN special representative on the prevention of sexual violence in conflict, told the Security Council that some of the women were gang raped by up to five or six men and many were rounded up.

In terms of finding the perpetrators, our correspondent said there was a broad statement about bringing “them to justice”.

“A commission was formed, but there is no date set for when they will go to the DRC,” she said, noting that the UN is frequently criticised for talking a lot but not taking action.

“There is a kind of sense here that something has to be done. We are just going to have to see how that red tape and bureaucracy takes it forward,” our correspondent. 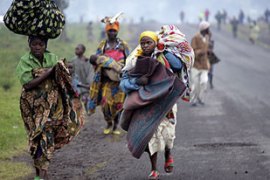 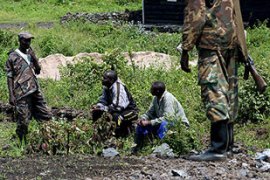 Spokesman for FDLR says group “in no way involved” in mass rapes in east of country.