Officials in Guatemala have called off the search for 15 people missing after deady landslides, fearing fresh avalanches of mud after the heaviest rains in 60 years.

The decision on Tuesday came as rescuers resumed their grim task of digging for corpses in a ravine next to the Pan-American Highway.

“The search has been called off because of the condition of the ground,” David de Leon, a spokesman for the government’s emergency management office CONRED, told AFP news agency.

The overall toll from the torrential early season rains stands at 45 in Guatemala and three in southern Mexico, but with at least 15 still feared to be buried alive in mud off the Guatemalan highway that figure could rise.

The rains triggered almost 200 landslides and collapses, causing at least a half-billion dollars in damages, according to the Guatemalan government, which ordered three days of national mourning and declared a state of emergency.

Alvaro Colom, the president, said on Sunday that the tragedy was made worse by a shortage of government funds after Tropical Storm Agatha, which killed 165 people and left thousands homeless in May.

The United States on Tuesday offered $4.38 million in aid to Guatemala, while the United Nations said it would send 20,000 food rations to help those affected by the floods.

Heavy rains in neighbouring Mexico meanwhile have led many rivers to burst their banks and authorities have declared a warning in the northeast of the country, where Tropical Storm Hermine made landfall on Monday.

Mexican authorities also said at least three people died and nearly half a million more were forced to evacuate their homes in the southern states of Oaxaca and Guerrero due to flooding.

Other countries hit with recent flooding and mudslides included Honduras, where floods killed 55 people, Nicaragua where 40 people died and El Salvador, where nine people were killed. 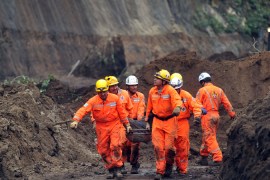