Prosecutors in Bahrain have pressed terrorism charges against Shia opposition activists, raising tension in the run-up to an October 23 election in the Gulf state.

The charge sheet released on Saturday accused the 23 activists, 10 of them prominent opposition figures, of “undermining national security.”

It alleged that the “leaders of the terror network” held secret meetings in Bahrain and abroad in a bid “to change the political regime through illegal means.”

“This sophisticated terrorist network with operations inside and outside Bahrain has undertaken and planned a systematic and layered campaign of violence and subversion aimed squarely at undermining the national security of Bahrain,” said a statement by Abdul-Rahman al-Sayed, a public prosecution official.

Most of the suspects are members of Haq, the Movement of Liberties and Democracy, a Shia Muslim group which rejected as inadequate reforms intended to put an end to Shia-led unrest that rocked the kingdom through the 1990s.

Since the arrest on August 13 of Abdul-Jalil al-Singace, the opposition leader, Bahrain’s government has ramped up the pressure and rhetoric. Rights groups say more than 250 Shia have been detained.

No details of the alleged coup plot have been made public.

Said Boumedouha, a researcher at Amnesty International, said that many of the detainees have accused the government of torture. Human-rights groups have urged Bahrain’s government to investigate those allegations.

“I spoke with one lawyer who said he went to the niyaba [public prosecutor’s office], and two of his clients said they were tortured,” Boumedouha told Al Jazeera.

“He saw marks of torture on their bodies when they removed their shirts.”

Bahrain’s Shia Muslim majority of nearly 70 per cent has long complained of discrimination in state jobs and housing and claims they are barred from influential posts in the security forces.

But Shias currently have 17 of the 40 seats in the country’s parliament and could make a bid for a majority in the elections on October 23.

“There’s a growing voice of opposition outside the parliament,” Nabeel Rajab, the president of the Bahrain Centre for Human Rights, told Al Jazeera.

“The Shias have realised that they have lost a lot in the last few years … the opposition is getting stronger.”

Conservatives in Iran have often echoed the complaints by Bahraini Shia Muslims about discrimination and perceived second-class status and have sometimes described Bahrain as Iran’s “14th Province”.

But no clear evidence has emerged of Iranian aid to the Shia opposition groups in Bahrain, and Bahrain’s leadership issued a statement last week distancing itself from any accusations toward Iran.

“Part of all this is definitely fear of the Iranian threat,” said Shadi Hamid, a Gulf affairs researcher at the Brookings Doha Center in Qatar. “There is more and more concern about Iranian influence even if it can be proven or not.” 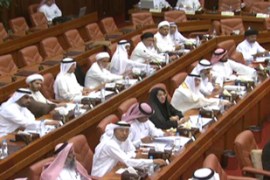 Al Wefaq bloc demands cabinet be chosen by parliament and not appointed by king.