Yu Myung-hwan, South Korea’s foreign minister, has offered to resign over allegations of nepotism involving his daughter’s employment in his ministry.

Yu tendered his resignation on Saturday following the controversial hiring of his daughter to a mid-level post handling free trade affairs in his ministry, state media reported.

“The foreign minister has resigned to accept responsibility for all the commotion caused by the ministry employing his daughter on a full-time basis,” the source said.

The resignation offer came a day after Yu made a public apology amid mounting criticism of the controversial hire.

Yu’s daughter, Yu Hyun-sun, was to sign a contract on August 31 with the foreign ministry to work on trade matters. But the ministry had earlier turned down all eight applicants for the job, including the minister’s daughter, during the initial hiring process for the same post.

The move prompted allegations that the ministry had rejected all applicants to give the minister’s daughter time to improve her application.

South Korea’s official Yonhap news agency quoted Yu’s spokesman as saying that the minister was “sorry to have caused trouble to the public” over his daughter’s hiring.

Yu also contended that the hiring process had been fair despite allegations of special favours, but he said his daughter would not take the job.

The president has ordered a thorough audit into possible rigging of the hiring process.

Yu, 64, is the longest-serving minister in the president’s cabinet. His resignation offer comes at a crucial time for South Korea as it is preparing to host a meeting of the Group of 20 rich and developing economies in November. 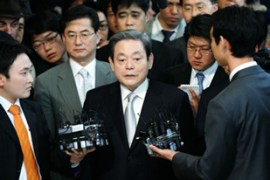