An oil and gas platform in the US Gulf of Mexico has exploded, setting off a blaze and a small oil spill.

Workers were forced to dive into the sea as fire engulfed the platform off the coast of Louisiana on Thursday. Massive plumes of grey smoke billowed into the sky as rescuers rushed to the site.

None of the 13 crew members suffered any injuries, the platform operator Mariner Energy said.

A thin sheen of oil spreading for about 1.6 kilometres was initially reported but later in the day, there were no signs of a spill.

“The boats and the aircraft on scene cannot see a sheen,” Captain Peter Troedsson of the US Coast Gurads said.

Mariner Energy said automated shutoff equipment turned off the flow of oil and gas from the platform’s seven producing wells as the crew evacuated.

A company spokesman said the fire started on an upper deck of the platform where living quarters were located, and had not been caused by a “blowout,” or sudden release of oil and gas from a well.

The incident ignited fresh criticism of the oil and gas industry as the region struggles to recover from the environmental disaster caused by a deadly explosion on a BP offshore rig in April.

“The BP disaster was supposed to be the wake up call, but we hit the snooze button. Today the alarm went off again,” Michael Brune, executive director of the Sierra Club environmental group, said.

“The oil industry continues to rail against regulation, but it’s become all too clear that the current approach to offshore drilling is simply too dangerous.”

An estimated 4.9 million barrels of oil gushed out in the Gulf of Mexico after the Deepwater Horizon drilling rig exploded on April 20. Eleven workers were killed in the accident.

Robert Gibbs, the White House spokesman, said he did not know whether the blast at the Vermilion rig on Thursday would affect the US administration’s current deepwater drilling moratorium.

The platform, located in 104 metres of water, was undergoing maintenance and was not in active production, the US interior department said.

The facility averaged 9.2 million cubic feet of natural gas per day and 1,400 barrels of oil and condensate per day during the last week of August, Mariner said.

The platform’s output is a small fraction of the 1.6 million barrels of oil the region produces on a daily basis.

However, news of the fire helped push up crude oil prices 59 cents, or 0.8 per cent, to $74.50 a barrel on the New York Mercantile Exchange.

Shares of Mariner Energy fell 2 percent to $22.90 and shares of Apache Corp, which is expected to buy Mariner Energy, also fell 1.5 percent to $91.06 Mariner has participated in at least 35 deepwater projects in the Gulf and operated over half of them.

Pritchard Capital analyst Stephen Berman said the market over-reacted to the news when it initially pushed Mariner’s shares down 5 per cent. 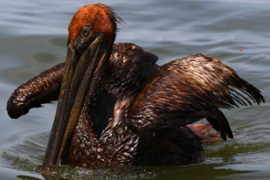 ‘Most oil from BP spill remains’ 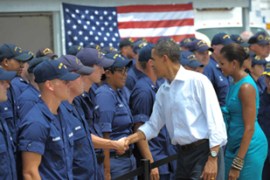 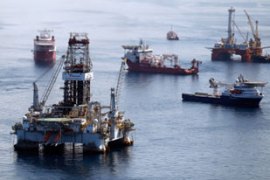 US state seeks compensation as BP and government officials proceed with relief well. 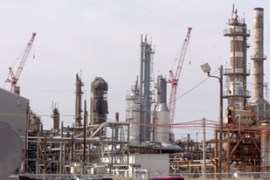