Hamas fighters have threatened to carry out a new wave of attacks against Israel after Palestinian and Israeli leaders relaunched direct peace negotiations in Washington.

Leaders for Hamas said 13 different armed groups, including themselves and Islamic Jihad, will join forces to launch “more effective attacks” against Israel.

The call on Thursday came after Mahmoud Abbas, the Palestinian president, and Binyamin Netanyahu, the Israeli prime minister held their first direct talks in nearly two years at a US-sponsored summit in the US capital.

A spokesman for the Qassam Brigades, the military wing of the Hamas movement, rejected the talks on Friday, describing them as “useless”.

Abu Obaida made the statement at a brief news conference in Gaza City, where he was flanked by several other masked men in army fatigues.

“We reject completely the slipping again from the Ramallah Authority to the useless round of negotiations, which make a cover for the Zionist aggression against our people,” Obaida said.

“We will not allow these negotiations to pass over, and resistance will have its loud voice as an answer to the land-selling negotiation,” he said.

Netanyahu and Abbas have been holding talks with the US administration, assisted by Hosni Mubarak, the Egyptian president, and King Abdullah II of Jordan.

On Thursday, Netanyahu and Abbas agreed to keep talking and produce a framework for a permanent peace deal.

“Two decades of negotiations that have yielded no results certainly create some atmosphere of concern, which does not extend to Palestinian factions only, but extends rather to within Palestinian society at large. So don’t expect unanimous support for such talks,” he said.

“These negotiations cannot go on without the inclusiveness of the Palestinian factions at large. For any peace formula to prevail it has to win the consensus and the comprehensive support of all factions in its entirety.”

But Ahmed Yousef, Hamas’ deputy foreign minister, told Al Jazeera that the Palestinians were not behind Abbas.

“This is not the right way to hold talks; we know Abbas is in big trouble. He has to be following the dictation from the Americans to come to Washington and unfortunately the Arabs that were backing him [are] being co-opted by the US,” he said.

“Abbas is not doing the right thing and that’s what most of the Palestinians have said.”

Hamas is in control of the Gaza Strip, one of the two territories that are supposed to be part of a future Palestinian state.

It wields virtual veto power over any agreement and has given no indication it will accept a deal with Israel reached by Abbas, who runs a rival government in the West Bank.

Abbas has repeatedly said he will present any peace deal to a national referendum, a vote that will include the people of Gaza. A vote in favour of peace will apply heavy pressure on Hamas to accept the will of the Palestinian people.

Thursday’s comments by Hamas come after the shooting of four Israeli settlers, including a pregnant woman, near the West Bank city of Hebron. Hamas has claimed responsibility for the killings. 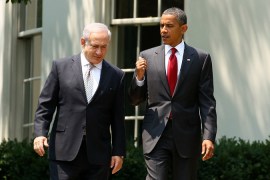 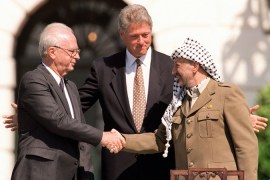 A history of talks and violence

A timeline of the key moments in Israeli-Palestinian relations. 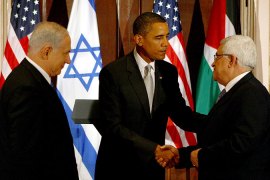 Just how ‘direct’ are the talks?

With key absentees, just how productive are the Palestinian and Israeli ‘direct’ talks? 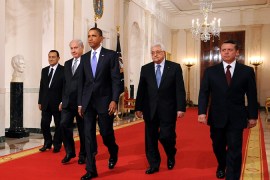 Can peace be achieved?

We discuss if the new direct talks will overcome lingering Israeli-Palestinian divisions.