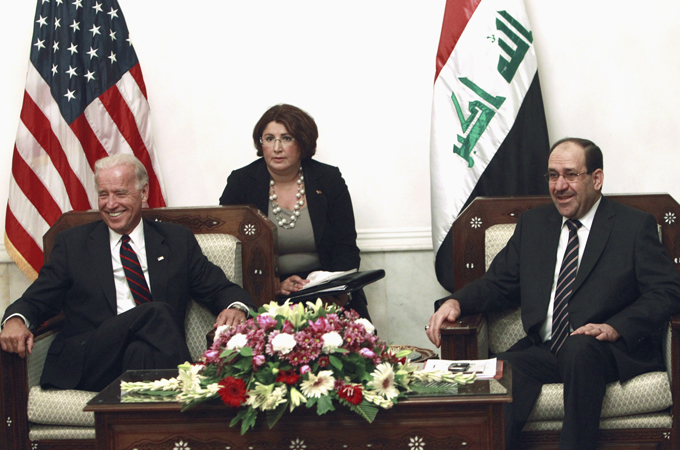 Nouri al-Maliki, the Iraqi prime minister, has praised the drawdown of US troops from his country and called Tuesday a “bright day for the people of Iraq”.

Al-Maliki spoke during a televised address hours before what US commanders say is the formal end of combat operations in Iraq.

Just under 50,000 US troops, who are expected to stay through until next year, remain in Iraq.

They have been rebranded as “advise and assist brigades,” tasked chiefly with training the Iraqi army – though they will be fully armed, and given a wide latitude to defend themselves.

Al-Maliki said the drawdown “restored Iraq’s sovereignty” and called it a victory for Iraq.

“It’s a day that Iraq gained back its sovereignty. Iraq is now its own master,” al-Maliki said.

“Our forces will take the lead and command combat operations after this withdrawal.”

The 2008 status-of-forces agreement between the US and Iraqi governments requires all American forces to be withdrawn by the end of 2011.

Al-Maliki said on Tuesday that he expects the US will meet that commitment.

“We were sure … that the withdrawal will take place, and we are committed to implement the final and complete withdrawal by the end of next year,” he said.

Barack Obama, the US president, is scheduled to deliver an address from the White House on Tuesday night discussing the drawdown.

The departing US troops leave behind a great deal of uncertainty and instability.

Neither of the two main blocs – al-Maliki’s State of Law, and Iyad Allawi’s Iraqiya bloc – have been able to build a coalition.

“Nouri al-Maliki is essentially a caretaker prime minister,” said Al Jazeera’s Mike Hanna, reporting from Baghdad. “There is no government in place.”

Joe Biden, the US vice president, arrived in Iraq on Monday night for a surprise visit.

He will spend much of the trip trying to cajole political leaders to form a government.

Biden met on Tuesday with al-Maliki and with Jalal Talabani, the Iraqi president. Biden told reporters he was there to brief Iraqi politicians on Obama’s speech, and to “get their input”.

Al-Maliki has tried to downplay fears that the political deadlock could lead to renewed sectarian violence in Iraq.

“I promise you the sectarian war will not return,” he said in his speech. “We will not allow it. Iraqis will live as loving brothers.”

Iraqis have mixed views about the US drawdown. A poll conducted this month by the Asharq Research Centre found that 60 per cent of Iraqis believe this is the wrong time for US troops to leave.

Security continues to be a major concern, with Iraq’s beleaguered security forces struggling to stop daily violence in Baghdad and elsewhere.

The Iraqi government said July was the deadliest month in more than two years, with at least 535 people killed.

Tuesday’s announcement marked at least the fourth “sovereignty day” since the US-led invasion in 2003.

Al-Maliki praised a similar milestone last June, when US troops withdrew from Iraqi cities and in January 2009, during a small ceremony in Baghdad.

Allawi also presided over a “sovereignty day” ceremony in 2004 with Paul Bremer, the then head of the Coalition Provisional Authority.