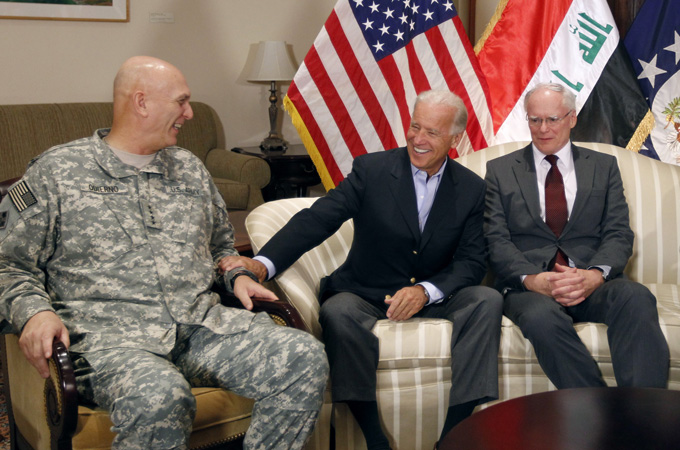 Biden pledged a ‘long-term relationship’ with the Iraqi government [Reuters]

Joe Biden, the US vice president, has landed in Iraq for a surprise visit on the eve of the official end of US combat operations in the country.

Biden will meet with several senior Iraqi officials, including president Jalal Talabani and prime minister Nouri al-Maliki, according to a statement from the White House. He will also meet Iyad Allawi, the head of the Iraqiya coalition, which won the most seats in Iraq’s March parliamentary election.

Iraqi politics remain deadlocked nearly six months after the vote, and Biden is expected to push political leaders to quickly form a government. He will also address the deteriorating security situation: Insurgents are increasingly targeting state institutions and the security forces.

“We’ll be fine, they’ll be just fine,” Biden said of Iraqi security during a brief public statement after he landed on Monday.

Several of Biden’s previous visits to Iraq have prompted angry reactions from politicians, many of whom accused him of meddling in Iraqi politics.

The Sadrist movement, the Shia party headed by cleric Moqtada al-Sadr, has already condemned Biden’s latest trip. Moshriq Naji, a senior member of the party, accused the US vice president of trying to “impose foreign agendas” in a statement to the Aswat al-Iraq news agency.

Barack Obama, the US president, will deliver a speech from Washington on Tuesday evening to mark the formal end of combat operations. Tony Blinken, Biden’s national security adviser, said the vice president would “preview” that speech in his meetings with Iraqi politicians.

“Even as we draw down our troops, we are ramping up our engagement across the board,” Blinken said.

“We are determined to build a long-term relationship with the government of Iraq.”

The 2008 status-of-forces agreement between the American and Iraqi governments requires all US forces to be withdrawn from Iraq by the end of 2011.

The US state department plans to increase its presence in Iraq as the military draws down. Hundreds of new diplomats are expected to arrive in Baghdad, and new consulates in Basra and Erbil.

Tuesday will also see a change of command for US forces in Iraq: The outgoing commander, General Ray Odierno, will be replaced by General Lloyd Austin.