Mexico has sacked 3,200 federal police officers, around 10 per cent of its force, in a bid to crack down on corruption, the government announced.

Facundo Rosas, the police commissioner, said at a news conference on Monday that the officers had failed to pass “confidence tests”.

More than 450 of them are accused of committing crimes. Another 1,485 officers expected to lose their jobs in the coming weeks, Rosas said.

The commissioner’s announcement is aimed at bolstering confidence in the Mexican federal police, who have taken a leading role in the country’s four-year-old drug war but are widely viewed as incompetent and corrupt.

Al Jazeera’s Mariana Sanchez, reporting from Mexico City, said: “There has been a sort of turning point in the last week where we have seen a massacre of 72 migrants, two car bombs in the capital – one against a television station and another against a police station – and three grenade attacks.

“There is a difference in the tactics because we are seeing more attacks against the population.

“So it seems like the drug gangs are trying to put fear into the population. They don’t want any investigation and they don’t want the press to report either.”

One of the latest fatalities was Marco Antonio Leal, the mayor of the small town of Hidalgo in northern Mexico’s Tamaulipas state, who was shot dead on Sunday.

Leal was shot dead by armed men in vehicles, the local attorney-general’s office said. His four-year-old daughter was wounded in the attack.

It was not immediately clear why Leal was targeted, but Tamaulipas has become one of Mexico’s bloodiest drug flashpoints since the start of the year as rival traffickers from the Gulf cartel and its former armed wing, the Zetas, fight over smuggling routes into the United States.

Leal had taken office in 2008 and was supposed to step down in December.

Hidalgo, a town of 25,000 people, is located 90km northwest of the state capital, Ciudad Victoria.

It is also near the border with Nuevo Leon state, where the mayor of another town, Santiago, was found murdered on August 18.

Local police allied with a drug gang are suspected in that killing.

Much of the violence in the area is blamed on the Zetas, a brutal, well-trained group of former elite Mexican army commandos that the US government calls the most dangerous organised crime syndicate in Mexico.

Attacks were also reported in the coastal city of Tampico late on Saturday, where two people were wounded when a police station was bombed.

Hours earlier, two bombs exploded near a morgue in Reynosa, on the US border, where the bodies of the Central and South American migrants – 58 men and 14 women – killed last week, were being kept.

Fifteen people were injured in the blast, local media reported.

Mexican government officials have said drug gangsare increasingly extorting and kidnapping migrants to raise money because a controversial government clampdown on organised crime has eaten into their other sources of revenues. 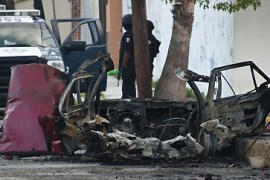 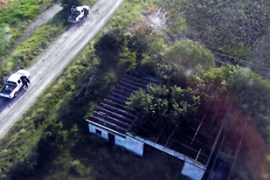 Many wounded in Mexico bar blast

At least 10 injured in explosion at beach resort of Puerto Vallarta, in Jalisco state. 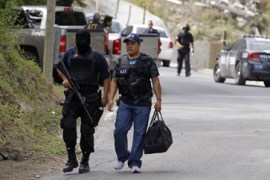