Human rights activists and investigators previously implicated Kadyrov with the crime – alleging that he had ordered the kidnapping.

But prosecutors said on Tuesday they did not have enough evidence to charge the president over Israilov’s murder.

Michaela Schnell, a spokeswoman for the public prosecutor’s office in the Austrian capital, said there was “not enough proof” to bring charges against Kadyrov.

“We must be careful as well because this is the president of Chechnya, and we cannot put him in jail so easily,” she told the New York Times.

Israilov claimed that he had been tortured by Kadryov and had served as a chief witness in court proceedings against Russia before the European Court of Human Rights.

His accounts to the European Centre for Constitutional and Human Rights had also formed the basis of a criminal complaint against Kadyrov, on charges of torture and attempted duress filed by Austrian lawyers in June 2008.

A trial date has yet to be set. 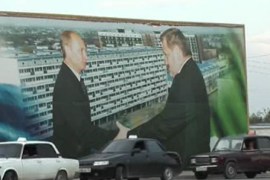 In the court of the Chechen king

We investigate the story of president Ramzan Kadyrov – autocratic gangster or politician?