Seven people were rescued from the turbulent waters that engulfed the vehicles, which were carrying 31 passengers.

“After the bus was washed into the river, I thought I could see a window at the top of the bus. I climbed out immediately,” said one survivor who climbed out of the vehicle window.

Rescue workers later found the submerged bus after the water had subsided, but were unable to locate the van, China’s CCTV showed.

The search for those missing has been hampered by torrential rain and silt that blocked the road, Xinhua said.

Heavy rains in recent weeks have caused chaos across much of southern China as the annual flooding season sets in. 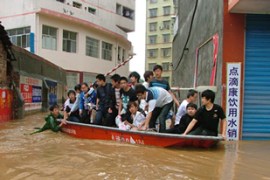 Seasonal phenomenon kills 155 and displaces one million in south and central provinces. 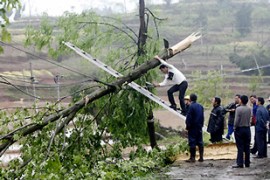 Rainstorms in southern China kill at least 65 people and destroy thousands of houses.