Cameron said that some of the British soldiers had lost their “self control” during the incident.

Michael Mansfield QC, a lawyer who represented the relatives of some of the victims, spoke to Al Jazeera about the inquiry’s findings.

“What they wanted was a public recognition of what went wrong on that day, seriously wrong, at the hands of agents of the state”.

Mansfield said the report left the “the door open” to possible legal action against the soldiers.

“I am not suggesting that any of the families I represent necessarily want that, but on the other hand what they are saying is, the law, as with this public inquiry, must take its course.

“A report should go, as David Cameron said it would go, to the director of public prosecutions, possibly in London, but more likely in Northern Ireland.

“And it’s for the director to consider, in the public interest, whether it is now necessary to mount a prosecution, because even if there’s evidence, prosecution doesn’t necessarily follow.

“But these are all considerations for the director, the families are happy to leave it in their hands”.

The families of those shot dead voiced relief that the inquiry had finally cleared the names of their relatives.

Speaking outside the Guildhall in Derry, where they spent five hours inside digesting the report before its findings were released, relatives of those killed addressed thousands of people gathered outside.

Just minutes before Cameron read his statement to parliament, relatives gave thumbs up signs to the crowd outside from the Guildhall windows, to huge cheers.

Liam Wray, speaking on behalf of his family, said the report found that his brother Jim was “specifically targeted while posing no threat, and shot in the back”.

“As he lay there, defenceless and dying, he was deliberately shot again,” Wray said.

“The Saville Report stated clearly that there was no justification for either of these two shots.”

He said his family and the people of Derry had been vindicated by the report.

Tony Doherty, whose father Paddy died when paratroopers opened fire, said to loud applause that the victims had been vindicated and the Parachute Regiment disgraced.

“It can now be proclaimed to the world that the dead and the wounded of Bloody Sunday, civil rights marchers, one and all, were innocent, one and all, gunned down on their own streets by soldiers who had been given to believe that they could kill with perfect  impunity,” he said.

The investigation by Mark Saville, a UK judge, looked into the events of January 30, 1972 when 13 men who were marching at the time were shot dead by the troops.

A fourteenth man later died from his injuries, while another 15 people were wounded in the incident.

Troops had charged crowds massing for the illegal Catholic demonstration in Bogside, a hostile city neighbourhood.

They said that they had been responding to shooting by the Irish Republican Army and were striking at armed individuals in the group.

However, no soldiers suffered injuries.

In the original probe by British authorities in the same year as the deaths, some of those killed were alleged to have been bombers or gunmen. 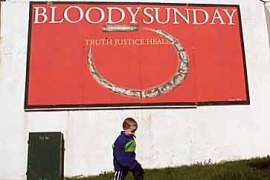 Families of protesters killed in Londonderry in 1972 hope new report will bring answers.