By
Gregg Carlstrom
Many of Afghanistan’s mineral deposits are in areas with Taliban presence (Source: US Geological Survey)

“The quality of the ore is excellent, and the richest varieties are to be found,” a surveyor wrote in a report on Afghanistan’s untapped natural resources.

The surveyor was one Captain Drummond, a British officer in the 3rd Light Cavalry. The year? 1841.

169 years later, the New York Times reported that Afghanistan could have nearly $1 trillion in copper, iron and other minerals. The US defence department called those reserves a “game-changer” for the US-led war in Afghanistan.

Despite centuries of attention, though, Afghanistan’s natural resources have proved difficult to extract. It’s not for lack of trying: The British empire took an interest in them; so did the Soviet Union, which conducted numerous geological surveys in the 1970s.

More recently, the World Bank published a report in 2004 on the vast economic potential in Afghanistan’s mining sector. And the US Geological Survey reported in 2007 that Afghanistan has “significant amounts of undiscovered nonfuel mineral resources.”

But companies looking to exploit Afghanistan’s natural resources would face major security and logistical challenges, plus a corrupt bureaucracy in Kabul. So there’s great reason to be skeptical that the Pentagon’s not-really-new discovery will have a significant impact on the Afghan economy or the stability of the Afghan government.

Iron and copper are Afghanistan’s best-known resources: US and Afghan officials estimate that the country’s reserves could be worth up to $700 billion. Newer surveys have also found large quantities of niobium, a rare metal used in specialised alloys; and lithium, a key component in many modern electronics.

Many of Afghanistan’s most resource-rich provinces are also its least secure. The vast majority of its lithium reserves are believed to be in Ghazni province, for example, an area in eastern Afghanistan plagued by increasing Taliban violence. (Earlier this week, five Afghan police were killed in an attack on their checkpoint in Ghazni; last week, three officers were killed by a roadside bomb.) 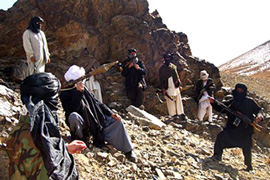 Ghazni is home to large lithium deposits, and a growing Taliban presence [AFP]

Then there is the question of shipping: how to move tons of minerals from landlocked Afghanistan to major ocean ports. It’s the opposite of the problem faced by Nato commanders, who have struggled for years to find secure supply routes into Afghanistan. Pakistan is one option, but those border crossings are dangerous, and the shipping industry in Pakistan has historically been controlled by a corrupt group of businessmen – the so-called “transportation mafia.”

Iran offers another route, but its southeastern provinces are plagued by a simmering insurgency, and the Iranian border is far from many of Afghanistan’s known mineral deposits.

A third option is the northern route, through the Central Asian republics and Russia, but that is a long, expensive journey – two-and-a-half times more expensive than shipping through Pakistan, according to Nato.

Any major mining efforts would be coordinated through Afghanistan’s ministry of mines, which some US officials have described as incompetent: There are no major mines operating in Afghanistan today. It also has a reputation as one of the country’s most corrupt institutions.

Wahidullah Shahrani, the current minister of mines, took office just five months ago. His predecessor, Mohammad Ibrahim Adel, was accused last year of accepting a $30 million bribe from a Chinese mining firm in exchange for a contract to develop the lucrative Aynak copper field.

Before that, in 2006, Adel was accused of accepting a bribe from Mahmoud Karzai, a brother of Afghan president Hamid Karzai, in exchange for control of a cement factory.

The Wall Street Journal reported in January that the mining ministry postponed awarding a major iron ore deposit in central Afghanistan. The report suggested that the bidding process had been marred by corruption.

The Pentagon’s announcement is likely to set off a scramble for Afghanistan’s minerals, particularly among its neighbors. China and India both have extensive economic ties with Afghanistan, and a huge need for raw minerals. But with no history of large-scale mining operations, poor security, and corrupt oversight, there are huge obstacles to the Afghan people seeing any benefit from their natural resources.

Indeed, political scientists have long warned of the “resource curse”: countries with extensive natural resources often develop far more slowly than those without.

“The particularly corrosive effect that the theft of these resources can have is to make politicians who were powerful and possibly corrupt even less accountable to the people,” said Mike Davis, a London-based analyst with the activist group Global Witness. “It increases their capacity to do everything from rig elections to building up militias.”

“It’s really like pouring petrol on a fire that’s already out of control,” he said.