The unrest started in the city of Osh on Thursday night, and authorities have admitted that they have lost control of the situation.

More than 1,000 people have been reported injured but doctors and rights workers have warned the real figure may be much higher because ethnic Uzbeks were too afraid to seek hospital treatment.

Russia sent hundreds of paratroopers on Sunday to protect its military facilities in the north of Kyrgyzstan, the Russian Interfax news agency reported.

The interim government has sought Russia’s help to quell the violence, but the Russian government has declined the request to send military assistance.

Much of the ethnic Uzbek neighbourhoods in Osh have been torched and thousands of ethnic Uzbeks have fled their homes, trying to go to Uzbekistan.

More than 32,000 ethnic Uzbek adults and thousands of children have crossed the border, Abror Kosimov, the head of the regional emergency services, said.

“In the whole of the [Uzbek] Andijan region, 32,000 adult refugees have been registered,” he told the news agency AFP.

He said the figures for child refugees had not been recorded but they were in the thousands.

Al Jazeera’s Robin Forestier-Walker, reporting from the border, said there was still a steady stream of ethnic Uzbeks trying to cross on Sunday and that violence in Osh was ongoing.

“We set out into the city earlier today but had to turn back because it was simply too dangerous.

Our correspondent quoted eye witnesses as saying that three Uzbek neighbourhoods were under attack, but stressed that he had only been able to hear the Uzbek side.

Talaaibek Myrzabayev, the chief military conscription officer in the capital, Bishkek, told the Associated Press news agency that Kyrgyz mobs killed about 30 Uzbeks on Sunday in the village of Suzak in the Jalal’abad region.

Ethnic Uzbeks had also ambushed a group of about 100 Kyrgyz men on a road near Jalal’abad and taken them hostages, Myrzabayev said.

Kurmanbek Bakiyev, the exiled former Kyrgyz president, has denied any involvement in the violence.

Bakiyev, who was ousted in April, said in a statement on Sunday that the reports of his involvement were “shameless lies”, and that the interim government that took over power from him is incapable of stopping the violence.

The current unrest is the worst violence in Kyrgyzstan since Bakiyev was ousted following anti-government riots in April.

Roza Otunbayeva, the leader of the interim government, said on Saturday that her government was powerless to stop armed gangs from burning down the homes and businesses of ethnic Uzbeks in Osh.

“Since [Friday], the situation has gotten out of control. We need outside military forces to halt the situation,” Otunbayeva, an ethnic Kyrgyz, said.

Russia has ruled out a military intervention “for now” but has sent an aircraft to Kyrgyzstan to deliver humanitarian supplies and help evacuate victims of the violence. 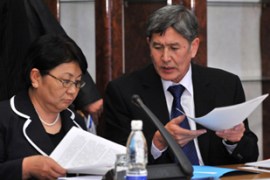 Vote originally scheduled for later this year is put off following ethnic violence. 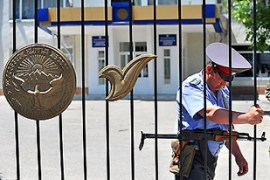 Attempt to storm university in Jalalabad leaves two people dead and many injured.