Chomsky was barred by Israeli immigration officials as he attempted to cross the Allenby Bridge from Jordan on Sunday.

The Jewish-American linguistics professor, who frequently speaks out against Israeli policy in the occupied Palestinian territories, had been scheduled to give a lecture at Bir Zeit University in the West Bank.

And despite Haddad’s statement, Chomsky said there was no “official” guarantee he would be allowed in and so decided to give the lecture by video link from Amman, Jordan’s capital, on Tuesday.

About 100 students attended the video link lecture at Bir Zeit University near the city of Ramallah.

Chomsky said he was told during his interrogation at the border that “Israel does not like what you say”.

The academic said preventing him from entering the West Bank was “tantamount to boycotting Bir Zeit University”.

Chomsky, who opposes a general boycott of Israel, told Israel’s Haaretz newspaper that Israel’s behaviour reminded him of South Africa in the 1960s, which thought it could counter its international pariah status through better public relations. 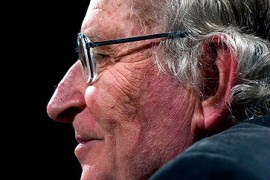 Israel stops US academic at border

Noam Chomsky denied entry to West Bank to give a lecture to university students.

Chomsky ban: “An end to freedom”?

Israeli commentators question whether entry refusal is party of a growing trend.