Authorities also said that a state of emergency already in place in Bangkok and 20 provinces would be extended to Kalasin and Mudkahan in the northeast.

The leaders issued emotional calls for their followers to leave the area, but in vain.

The red shirts also attacked the offices of state-run Channel 3, setting it on fire, forcing the evacuation of its executives by helicopter. Police rescued the rest of the staff.

The English-language The Nation and Bangkok Post newspapers evacuated their staff after threats from the red shirts.

A large office building down the street from the Bangkok Post office was set alight.

Meanwhile, Thaksin Shinawatra, the country’s ousted prime minister whom many of the red shirts support, said he feared a military crackdown could lead to guerrilla warfare across the country.

“There is a theory saying a military crackdown can spread resentment and these resentful people will become guerrillas,” he told the Reuters news agency by telephone.

Wednesday’s offensive came after days of escalating clashes and street battles as the Thai government stepped up pressure on the red shirts to end more than two months of crippling protests.

Panitan Wattanayagorn, the government’s spokesman, said on Wednesday that red shirt leaders had accepted a “road map” to reconciliation and that most of the areas occupied by the protesters were secure.

But the peace hopes were quickly belied by reports of grenade explosions in and around the red shirts’ camp.

Wednesday’s crackdown began with about 100 soldiers armed with automatic rifles and shotguns, along with several machinegun-mounted armoured personnel carriers, breaching the red shirts’ barricade at the southern end of their protest site.

The armoured vehicles repeatedly rammed the barricade, made up largely of tyres, sharpened bamboo poles and razor wire, before breaking through the flattened structure.

Al Jazeera’s Wayne Hay, reporting from the protest zone, said troops moved quickly through the first kilometre of the site, towards the main stage where the leaders of the red shirts were believed to be.

At least two bodies – suspected to be of slain red-shirt guards – were seen being removed from the area, he said, and the Thai Red Cross appealed for blood donations.

Jongjet Aoajenpong, the head of a local hospital, was quoted by the AFP news agency as saying that an Italian journalist was shot in the stomach and “died before arriving”. 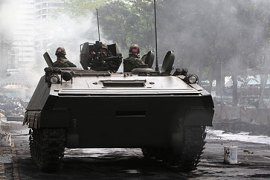 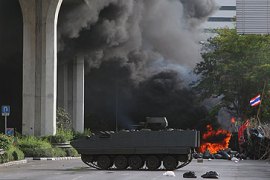 On the ground amid Thai offensive 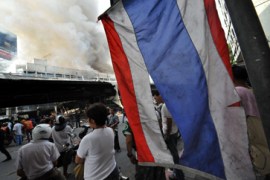 UN urges both sides to “step back from the brink” as tension persists in Bangkok. 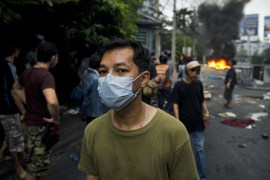 Thai government says it will accept offer if protesters return to their Bangkok camp.