The number of demonstrations by workers has increased from 97 in 2002 to 742 in 2009, according to the Land Centre for Human Rights.

Egypt’s economy has grown robustly in recent years, but many people say only the wealthy have benefited.

After a food crisis in 2007 and 2008 that triggered bread shortages and protests, inflation has eased, but workers say their problems endure.

“Prices are rising and workers’ wages are declining,” Hisham Oakal, a worker from a factory in Egypt’s Nile Delta, said during Saturday’s demonstration.

“Meat has become a luxury item that most of us cannot afford.”

Despite their limited support from Egypt’s giant workforce, some political analysts say such protests could spawn new alliances, creating the possibility of political change before next year’s presidential elections.

“This is why co-ordinated protests over one unified goal, raising the minimum wage, has the potential to galvanise disparate groups across sectors,” Ahmed Naggar, a  leading Egyptian economist, said.

However, for many in Egypt, where UN figures put gross domestic product per capita at $1,780, the call for political change may be secondary to more basic demands for a better income and jobs. 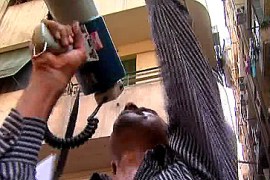 Protests in Cairo draw attention before parliament and 2011 presidential elections. 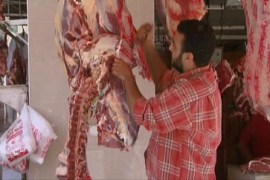 Egyptians take meat off the menu