Investigators in Poland are expected to listen to cockpit conversations from the flight recorders, also known as “black boxes”, to see if there were “any suggestions made to the pilots” from other people aboard the aircraft.

The Tu-154 crashed near Smolensk airport in western Russia on Saturday while trying to land in thick fog.

All aboard were killed, including Lech Kaczynski, Poland’s president, and dozens of Polish political, military and religious leaders.

Investigators of the crash identified Maria Kaczynska, the president’s wife, on Monday and said she would be returned home so she could be buried with her husband.

It was brought home to Poland on Sunday, driving tens of thousands of Poles to line the streets to pay their respects as the hearse carrying the coffin made its way to the presidential palace in the city centre.

Poland has moved to fill important positions in the state administration, with Bronislaw Komorowski, the acting president, saying he had replaced a number of important roles.

“The first task I am going to set for the new National Security Bureau chief is a review of the rules for travel of top military officials,” he said on Monday.

“Despite a sombre mood, Warsaw got back to business, an important sign of Poland’s ability to overcome the shock,” he said.

He also said Russian’s investigation into the crash may help improve relations between the two countries, some 70 years after the massacre at Katyn.

Our correspondent said: “The “Warsaw memorial to the thousands of Poles killed by Soviet troops at Katyn and elsewhere is a symbol of decades of mutual suspicion and mistrust.

“If Russia delivers the investigation it has promised, and provided progress isn’t derailed by scaremongering conspiracy theories about the cause of the crash, then the way will be open for transformed relations between the two countries.”

Russia on Monday united with Poland in mourning Kaczynski’s death, with flags flying at half mast and entertainment programmes cancelled.

Dmitry Medvedev, the Russian president, signed a book of condolences at the Polish embassy and placed a wreath of red roses in front of a portrait of Kaczynski and his wife.

Poland has declared a week of national mourning following the disaster.

Komorowski said he would announce the date of a presidential poll after talks with all political parties.

Poland had been due to hold a presidential election in October, when Lech Kaczynski, a conservative, was expected to run against Komorowski, a liberal. 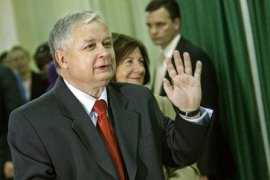 The president of the Republic of Poland died in a plane crash on April 10, 2010.