The collisions – with proton beams being smashed into each other at 3.5 times the previous record speeds – are expected to help scientists understand the nature of the universe.

“It just shows what we can do in pushing knowledge forward on where we came from, how the early universe evolved,” Cern director-general Rolf Heuer said.

“The high point so far of the experiment, the collisions marked a significant step forward for physics and could be seen as a giant leap for mankind,” Heuer said, speaking in a video relay from Tokyo.

The success came after the experiment was delayed for a few hours by technical glitches with power supply.

But the third attempt triggered collisions among the 20 billion protons in the LHC, which runs about 100 metres below the Swiss-French border.

“We’re within a billionth of a second of the Big Bang,” James Gillies, a Cern spokesman, told the AFP news agency.

Cern now plans to run the machine continuously for a period of 18 to 24 months, with a brief interruption for technical purposes at the end of 2010.

The aim is to see if certain particles can be recreated, in an effort to understand the moment after the Big Bang – believed to be the explosive event some 14 billion years ago which created the Universe – in part by explaining how elementary particles acquire mass.

As the tests continue scientists around the world will sift through and process the data, searching for evidence of a theorised missing link called the Higgs Boson, also known as the “God Particle”.

Despiona Hatzifotiadu, a Cern scientist, said the experiment would “give us a clue of how we were created in the beginning”.

It also aims to shed light on “dark matter” and subsequently “dark energy”, invisible matter or forces that are thought to account together for some 96 per cent of the cosmos. 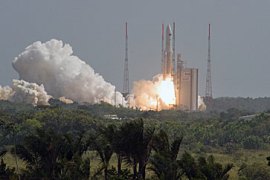 Chief of mission talks to Al Jazeera about the launch of Herschel and Planck space probes. 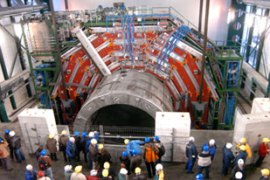 Critics fear the experiment could go wrong and destroy the Earth. 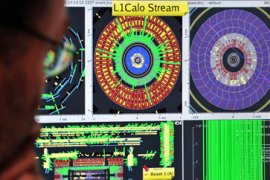 Scientists in Switzerland hope to recreate the conditions of the big bang.